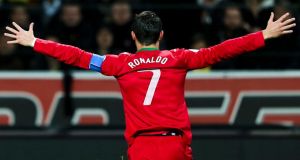 Portugal’s Cristiano Ronaldo celebrates after scoring one of three goals against Sweden at Friends Arena in Stockholm. Photograph: Mario Cruz/EPA 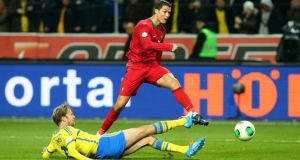 Poor old Franck Ribéry. After weeks of exhaustive canvassing for Ballon d’Or votes on his own behalf, Cristiano Ronaldo took 38 second-half minutes in Stockholm to tear the Frenchman’s candidature to shreds, at the same time as Les Bleus were enjoying their best night in years at the Stade de France.

Before Tuesday night, some of us had allowed ourselves to be convinced that this year’s running would be different. Ribéry, the ultimate epitome of individual quality combined with supreme work ethic at the hub of team brilliance, seemed to have a real possibility of winning the prize after being the main motor behind Bayern Munich’s historic year. Yet if football’s most prestigious individual prize has become simply that in recent times, a celebration of the world’s single most brutal punisher in front of goal, then it is surely game, set and match to Portugal’s captain.

The news that Fifa has extended the previously closed voting period to the end of the month – and will allow those who have already submitted their choices to alter them – cannot be good news for Ribéry either. Ronaldo’s display on Tuesday night was of the type that defines eras, never mind seasons, with his three goals drawing him level with Pauleta on Portugal’s all-time scorers list, with 47.

Having already in September eclipsed the mark made by Eusébio –widely considered in Portugal to be the only player in the country’s history to threaten Ronaldo’s status as their greatest ever – this was further evidence for the nation’s ceaseless quest to recognise him as the world’s best.

Even by their own expressive standards, Portugal’s leading sports titles are beside themselves today. Ronaldo Põe Portugal no Brasil – O Maior! (Ronaldo puts Portugal in Brazil – The Best!) was the frontpage proclamation of A Bola, embellished with a quote from Ronaldo himself, positioned by the newspaper as a further riposte to the backtracking Fifa president Sepp Blatter. “I don’t have to respond to anyone,” Ronaldo said post-match. “I’m just me.”

Record’s headline was an even less subtle nudge to voters – Bola de Ouro (Ballon d’Or), while O Jogo led with the simple headline “Colossal”. “If it was needed,” gushed the Porto-based daily, “he’d fly the plane (to Brazil).” Given his capacity to take matters in hand on international duty, it’s not that much of a joke.

It was an evening of that kind of enduring delirium, even if it reminded us of Ronaldo’s capacity – which is quite baffling to the Portuguese – of rubbing opponents up the wrong way. He was jeered by the Swedish crowd throughout; every time he received the ball, lost the ball or had an unsuccessful effort on goal. Ronaldo also endured the drone of “Messi, Messi” from the stands, which first began two years ago when Portugal’s delegation arrived in Sarajevo ahead of the Euro 2012 play-off against Bosnia-Herzegovina. Some local kids even scaled the stadium fence at Zenica to continue the baiting. Ronaldo responded by extending his middle finger.

His demeanour in Stockholm was cut from similar defiance, as he simply moulded events to his desire. His display at the Friends Arena carried all the features that his detractors use to beat him – dissatisfied tirades at team-mates, tunnel vision for the goal and seemingly bathing in the opprobrium in the aftermath of his goals.

In the event, he was more than entitled to all three. When Portugal rocked, he refused to allow them to tumble. His finishes were exemplary, pitiless and unanswerable. He is, in the words of his team-mate Miguel Veloso, “a machine”. The scorecard may have read Zlatan 2 Cristiano 3 but the difference was much more appreciable. Ibrahimovic gives hope where there is none. Ronaldo makes the impossible possible.

In his current mood, he is perfectly placed to streak away from Lionel Messi’s challenge for the Ballon d’Or, especially with the Argentinian expected to be out through injury until 2014. It is not fanciful to expect Ronaldo to be close to a half-century by the time Barcelona’s jewel returns to action.

“He’s not from this planet,” said the Portugal striker Hugo Almeida after the game. “It’s absolutely incredible that we’re still discussing who’s the best in the world.”

Tuesday night in Stockholm may have been the last word for now.

1 Shock at golf clubs as sport faces shutdown in Level 5
2 Dan Martin toasting another stage win at the Vuelta
3 Andy Farrell reshuffles his hand for rescheduled Italy game
4 GAA scrambling to deal with GPA demand for ‘baseline testing’ of all county panels
5 Ireland 5 Germany 2: When Nazi salutes took over Dalymount Park
Real news has value SUBSCRIBE
Crossword Get access to over 6,000 interactive crosswords