If the Dutch projected this iconic image, Johan Cruyff embodied their style in his very being 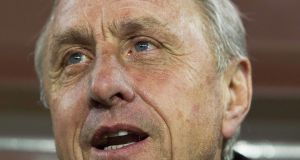 Over the years I’d pluck a name from the mind’s eye to describe a young player. We all do. Once in a blue moon I’d nudge Noel O’Reilly, my late partner in crime, and nod towards a tall, languid boy with every skill under the sun, “bit of Cruyff about him . . .”

Up until 1974 Ireland never feared Holland. We were always expected to beat them. But that World Cup changed perceptions.

Back then European teams were not associated with any real panache.

Our style council was chaired by the dominant Leeds United side and their fairly brutal approach. From the World Cup in 1966 into the mid-70s what we saw of professional football was on mucky English pitches as George Best (who got kicked a lot), Alan Ball and Nobby Stiles were players who stood out. Then there was Billy Bremner and Johnny Giles – proper hard men as much as they were quality footballers.

There were a few flashy boys at Spurs but ours was a rough, tough, furious game.

Ajax came first, their incredible side winning three European Cups in the early 1970s. All we knew was 4-4-2 but here was three centre halves who weren’t centre halves at all. Our rigid image was Jack Charlton and Norman Hunter – big, awkward fellas who could hack and head. The essence of the Dutch was every player being comfortable on the ball, they had shape but no positions. It was football on a carousel. I

If the Dutch projected this iconic image, Johan Cruyff embodied their style in his very being. It was his physical shape, that lean body, his pirouetting movement.

The man was so attractive. Pele was shorter, stronger- looking. The great German striker Gerd Müller, whose goal snatched Cruyff’s finest moment from his grasp, was also of squatter stature.

Cruyff was elegance personified, top of the ground artistry and yet he would twist like an octopus to fool his constant shadow.

He is the only bloke in football whose name describes an act of play that became part of coaching. You learned how to pass, tackle and head the ball, then you saw someone doing the Cruyff turn. Then you fell in love with mastering the ball.

His numbers will also live forever. Three-time winner of the Ballon d’Or. Four European Cups (one as Barcelona manager) – 33 goals in an all too few 48 internationals (the Dutch ceased wearing numbers 1-11 when he claimed 14).

Of course the masterpiece remains incomplete. Despite a perfect, untouchable start to the ’74 final, when the closest a West German player came to the ball was tripping Cruyff in the area before Neeskens drilled the penalty down the middle, Holland lost 2-1.

Over the years I’d pluck a name from the mind’s eye to describe a young player. We all do. Once in a blue moon I’d nudge Noel O’Reilly, my late partner in crime, and nod towards a tall, languid boy with every skill under the sun, “bit of Cruyff about him . . .”

I remember watching St Pat’s as a kid and Ronnie Whelan senior was like that. Ronnie junior also carried himself with that lovely balance, comfortable turning right or left and had a trick or two about him. Now, neither Ronnie, father or son, were Cruyff. He was unique, but they provided that similar thrill. It was their shape, that disguised physicality. Like footballing ballerinas.

Regarding the shaping of Martin O’Neill’s 23-man squad for the Euros, the main decisions are largely made. That’s the case even ahead of tonight’s Switzerland friendly and Slovakia on Tuesday – unless somebody does something exceptional. This isn’t blind loyalty by O’Neill. The squad has a settled look.

Rob Elliott looks set to make it as goalkeeper cover instead of Keiren Westwood. Six of the eight defenders pick themselves. Seven of eight if Marc Wilson gets himself fit.

In midfield Harry Arter can squeeze in, and so should David Meyler, with Darron Gibson to miss out. Alan Judge could also go to France but really the only decision to be made is Robbie Keane or Kevin Doyle. How well do we know are either of them are playing in America? With Robbie now injured, this could be Doyle’s only chance.

1 Colin Kaepernick’s exile is too fresh for NFL to speak out on US protests
2 Royal Portrush: Golf clubs ‘in real distress’ as eyes turn to 2021
3 Rodgers shunned by some family members for leaving Celtic
4 Ken Early: Why international football is fading into obscurity
5 Fitzgerald says inter-county game should resume before club fare
Real news has value SUBSCRIBE
Crossword Get access to over 6,000 interactive crosswords