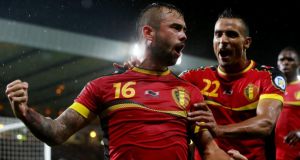 Steven Defour of Belgium celebrates after scoring a goal during a qualifying match against Scotland at Hampden Park. Photograph: Scott Heavey/Getty Images

Last year Cardiff City striker Frazier Campbell spoke fondly of the formative season he once spent on loan at Royal Antwerp, Manchester United’s feeder club in Belgium. Then a young, ambitious footballer from Huddersfield, Campbell shared a four-bedroom flat in Antwerp with fellow United embryos Jonny Evans, Darron Gibson and Danny Simpson in the sort of living arrangement that leads to symphonies of farting and honours from the University of PlayStation.

“I remember one day we were bored so we went to the equivalent of Toys “R” Us, got super soakers, water balloons and were just driving down the streets watering people from the car,” he told the Daily Mail in a sweet portrait of the modern British-schooled footballer. It was the kind of experience, Campbell said, that “helped me grow”.

There is no harm in messing, and it is not the fault of the youngsters that British football culture is to intellectual pursuits what David Moyes is to carefree expressions. All the same, it is hard not to wonder at the contrasting trajectories of England and Belgium, where Campbell and his pals were toting water pistols at a time when many young Belgian footballers were being encouraged to hit the books.

Incredibly, after failing to qualify for a major tournament for 12 years, Belgium travel to the World Cup as fifth favourites with many bookmakers, a result of what has been called, unfortunately, a “golden generation” of players. Whatever about golden, it is talent-laden and as mature as it is young, exemplified by defenders from this country of 11 million people captaining two of the Premier League’s top four clubs.

The success has several fathers, including a smart blueprint by the Belgian FA to overhaul structures and introduce a common playing style at the Juliper league’s clubs more than a decade ago. The coming-of-age of a group of second-generation footballers of African descent is a factor certainly more significant if less rigorously planned.

Perhaps most striking of all is the emphasis Belgium has put on educating its young players, to the degree that Niall Quinn has described his amazement that Simon Mignolet’s main interest when the then Sunderland chairman sought to sign him was how much time the club would allow him to pursue his studies. In a heartwarming glove story, the goalkeeper now has his hands on a social science degree.

“All the guys out there, their education is very important,” says Foley, who won six caps for Ireland under Mick McCarthy back in 2000. “At Cercle Brugge we had some young guys who were talented who were coming in from the second team into the first team and they would still keep up their schooling . . . some days they’d have to miss training to be at school or do exams.

“This keeps young fellas very grounded I think. So many times you see in the UK where young fellas are on good money and it goes to the head and they just lose the plot. Out in Belgium you’d rarely come across a fella where you think he needs a slap to calm him down a bit. They were all educated and grounded . . . if you said to an 18-year old in the UK who’s playing in someone’s first team, ‘Would you like to do a course?’, they’d laugh at you.”

Education doesn’t exactly make a footballer, but it does help keep him centred on what can be a fickle path: better able to cope with disappointments and successes, pressure and expectations, fierce competition and foreign environments. In other words, better equipped to make it. Foley, in a nutshell, calls this “confidence”. “These guys know they’re talented, they speak three or four languages. And they’re not afraid of saying something that might come out wrong.”

The culture of pragmatism and good sense is reinforced by the Belgian approach to the laughably unglamorous world of pensions. In the UK young players can opt in or out. “In Belgium you have no option, it goes in and that’s it. Young fellas don’t have the opportunity to blow everything they get.”

Former Belgium manager Georges Leekens, now in charge of Tunisia, puts the country’s progress down to “bigger mentality” after a lost decade. “We needed a more professional organisation and not to always talk about the past,” he says. “We changed everything: from team manager, to specialist staff, logistical staff, administration staff, physical coaches, scouting projects. Because we were a small country also I think we were small thinking. The players show a fantastic attitude . . . they’re open to new things, they have a big mentality: don’t look backwards and don’t be pleased, always be hungry.”

In what appears a re-enactment of the narrative that once saw Gerard Houllier credited with the transformation of France’s fortunes as the French FA’s technical director, former coach Michel Sablon is widely praised for sending Belgium on its way after the national team’s embarrassing early exit from Euro 2000, which it jointly hosted.

Qualification for the 2002 World Cup was a fig-leaf that couldn’t hide the modesty of the league’s output at the time, or that of the players it was producing.

Youngsters were instructed to play five-a-side, older kids seven-a-side, and the introduction of full-size pitches was delayed. Winning took a back seat to development. The world, it was decreed, would be round instead of flat.

You would expect reports of such enlightenment to be followed by news that the fortunes of Anderlecht, Standard Liege, Club Brugge and so on in European competitions were quickly transformed, and they all lived happily ever after. Good practices rarely bring about dramatic short-term gains – but they do make waves beneath the surface.

On the pitch, performances by the national underage teams improved greatly. Off it, clubs have been reinvesting hefty transfer fees in their infrastructure, including new training facilities for Anderlecht and Standard Liege and a sprinkling of new stadiums.

The fruits of this work are seen in the number of young academy players currently filtering through to the first teams of leading Belgian clubs, and fresh hope that they will one day be able to hold on to their brightest talents for longer. If so, reinvesting then larger transfer fees would complete a virtuous circle.

For all the wisdom Belgium has shown in the last decade, there is no escaping that its greatest boon has been the chance harvest of the country’s post-war immigration policy, particularly that of the early 1960s, when demand for labour was strong in the country and there was an implicit acceptance by authorities and employers that regular channels were being circumvented.

Wilmots is the beneficiary of a fantastic array of Belgian-born second-wave talent, including Vincent Kompany and Roman Lukaku (DR Congo), Fellaini and Nacer Chadli (Morocco), Dembélé (Mali) and Witsel (Martinique). Apart from their literal gifts, these players – with Kompany as figurehead – have brought with them a spirit of globalisation that greatly dilutes traditional French-Flemish divisions in the Belgian squad. Wilmots is also given credit for a smart, consensual approach. Seemingly overnight, the national team has been issued with a new, multicultural identity – what Leekens calls a “bigger mentality”.

In the absence of the injured Christian Benteke, Belgium travel to Brazil with question marks over who will score the goals, and there are concerns about Wilmots’s options at full-back. After impressing in qualifying, recent results in friendlies have been poor. But an obliging group, including Russia, Algeria and South Korea, offers strong hope of progress and a likely second-round meeting with Germany or Portugal.

Foley suggests the biggest doubts are over the mental strength of a squad that is extraordinarily young, and untested on this stage. “When their backs are against the wall, what will happen?”

We look forward to finding out.