Behold the Maracana, the place that holds the soul of the Brazilian nation

Built for the 1950 World Cup, the great stadium has lost some of its lustre in the intervening years 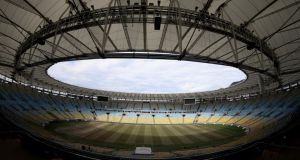 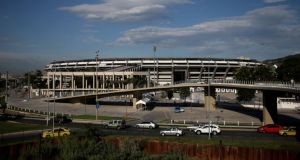 The Maracana Stadium, which will stage the World Cup final next month, has been at the heart of Brazilian football.

Asked a few weeks back why he went on Ireland’s 1982 tour of South America when so many others had already made their excuses, Liam Brady explained that it was simply because playing Brazil in the Maracana would have ticked some pretty big boxes for him. To anyone of even a vaguely similar vintage no further explanation would be required.

The Maracana’s appeal was rooted in the reality of it being the world’s biggest stadium, built for the 1950 World Cup with the specific intention of dwarfing its closest contender. The fact that late 20th-century communications made opportunities for closer scrutiny of the place rare ensured there was a vagueness about it all that somehow enhanced its allure.

Seeing the pictures, reading some of the stories and knowing that this was where that amazing team of 1982 hung out when they were playing at home in Rio was enough to get you hooked.

Brady, as it happens, was to be severely let down on that trip 32 years ago – the team eventually played elsewhere – and I shared a little of his disappointment when I finally got to lay eyes on the place myself a few hours after touching down in Rio on Monday morning.

The venue (actually officially named the Estadio Jornalista Mario Filho, after a local reporter who championed its construction – what’s not to love about that?) has had a fortune spent on it in recent years but safety and other issues have led to a reduction in capacity to just short of 80,000.

That barely gets it into a list of the world’s largest top 25 at this stage although it’s still far too large for the modern-day needs of club sides that generally use it. A Fluminense derby game with Flamengo once attracted 190,000 fans, about 20,000 short of the estimated real attendance at the final match of the 1950 World Cup, but their average home gates in 2012 were both around 14,000.

Even for a stadium of its present size it is actually slightly underwhelming for the first-time visitor, though, with stadium architect Angelo Spampinato acknowledging that: “From outside, the stadium doesn’t look as imposing as one would expect”.

One obvious reason is its height, or lack of it, it is only rises 25 metres or so relative to its surroundings and the place actually looks best in aerial shots which show its wonderful roof structure.

The surroundings are somewhat standard fare for stadiums these days. The Maracana is part of a wider complex that includes an indoor area that will host volleyball in the 2016 Olympics as well as an attractive, if dated, outdoor pool complex.

Outside of this there seems to be little enough to recommend the place. The river that got its name from a local word for parrot and provided the more commonly used name for the stadium is a sad enough affair these days and much of the neighbouring area looks pretty run down with all of the transport infrastructure intended, it seems, to ensure visitors have to spend as little time as possible in the vicinity.

All of which is rather sad. The grand scale of the intention behind its construction was always part of the attraction. It took seven architects then 10,000 labourers to build it and Filho said that from its location just to the north of Rio’s centre it could provide not just the city but the whole country with a new soul, serving as a reminder of Brazil’s vast but as yet unrealised potential.

That vision seems a little at odds with the sight of the old, clearly once beautiful but now derelict Brazilian Indian Museum just beside the stadium from which squatting indigenous locals were controversially evicted in March. The building is now surrounded with a roughly constructed hoarding and on Monday the grounds were occupied by police cars.

At the same time, a consortium that includes a huge Brazilian construction company and giant American conglomerate AEG, owners of, among other things, the LA Galaxy and London’s O2 Arena, has taken over the running of the Maracana on a 35-year contract. Given the € 500 million or so of public money that has been spent on it during the past decade, the deal has attracted a great deal of local criticism.

The Maracana was, of course, always intended to be a place of entertainment but AEG aren’t known for doing souls of nations and Filho’s name may soon seem as out of place as the romance at the heart of his vision.

1 Golf in Level 5 Covid restrictions: Clubs still waiting to hear if they can remain open
2 Gordon D’Arcy: Ireland don’t need to do a Finn Russell on it
3 Hugo Keenan could start in changed Ireland team against Italy
4 Man United’s latest Parisian party more impressive than heist of 2019
5 Aki, Ringrose and Henshaw: Brian O’Driscoll has his say on Ireland’s midfield riddle
Real news has value SUBSCRIBE
Crossword Get access to over 6,000 interactive crosswords