West Ham qualify for Europe through the fair play league 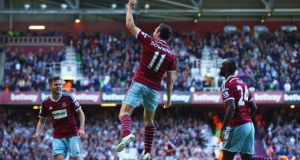 West Ham have qualified for Europe for the first time since 2006, via the fair play league. Photograph: Getty

West Ham’s new manager will have Europa League football to contend with after the club qualified through the fair play league.

Just days after the end of the season and Sam Allardyce’s departure, West Ham have secured European qualification for the first time since the 2006–07 season. They finished top of the Premier League’s fair play table and will be among 104 teams whose Europa League campaign begins with the first qualifying round on July 2nd.

West Ham have three rounds to negotiate before August’s play-off round determines the 22 teams advancing to the group stage.

Among their possible first round opponents are UCD after the students also made the first qualifying round via the fair play league, as well as League of Ireland runners-up Cork City.

West Ham’s joint-chairmen, David Sullivan and David Gold, said in a statement: “We are delighted to have won a place in the Uefa Europa League as we want to ensure the Boleyn Ground the best send-off possible, and progress in this competition will certainly help with that. Starting in early July will bring its challenges but everyone at the club, from the board to the players and supporters, will be relishing the opportunity to feature on the European stage. It should be a fantastic experience.”

West Ham will find out their opponents when the draw is made for the first and second qualifying rounds on June 22nd.

Entering the Europa League at this stage is likely to prove an interesting challenge for Allardyce’s successor. The former West Ham defender Slaven Bilic is the favourite with the bookmakers and the Croatian has confirmed he will leave the Turkish side Besiktas. Roberto Di Matteo is the second favourite after resigning as Schalke’s coach, while Unai Emery and Steve McClaren figure on the list.