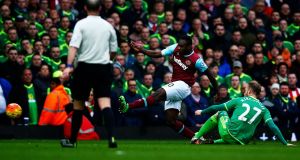 Sam Allardyce endured an unhappy return to Upton Park as Sunderland slipped to a 1-0 defeat against West Ham.

Yet the former Hammers boss will be wondering how his side did not take something from the game after Jermain Defoe and Jack Rodwell missed glorious chances after the break.

The build-up to the game centred around Allardyce, whose relationship with the West Ham supporters was strained to say the least during his four years in charge.

He may have anticipated a hot reception yet nothing more sinister than a polite smattering of applause greeted the 61-year-old as he took his seat in the opposition dug-out.

The opening 20 minutes of the match itself was also perhaps a little too cordial, with neither side mustering an attempt at goal.

But the game woke up when Manuel Lanzini tip-toed across the 18-yard line and teed up home skipper Mark Noble, whose fierce drive from the edge of the area was tipped onto the crossbar by Vito Mannone.

At the other end, Hammers goalkeeper Adrian’s attempts at ball juggling almost backfired as he was charged down by Wahbi Khazri, but luckily for the Spaniard the ball spun to safety.

Moments later Khazri whipped in a swerving, dipping free-kick which clipped the top of Adrian’s goal.

The winner arrived after half an hour with a piece of Sunderland defending which would have left Allardyce choking on his chewing gum.

Sam Byram’s pass down the right wing looked harmless until Patrick van Aanholt allowed Antonio to gather the ball and turn back inside.

The winger then strolled into the penalty area unchallenged before rifling his shot across Mannone into the far corner.

Antonio was denied a second by Mannone before the interval, but it was Sunderland who would regret missed opportunities in the second half.

Former Hammers striker Defoe should have equalised in the 50th minute after running onto Lee Cattermole’s lofted pass, but he snatched at his shot and pulled it wide.

Defoe then got free in the area only to curl his shot off target, before substitute Rodwell came up with the miss of the match.

DeAndre Yedlin got free down the right and cut the ball back for the midfielder who only had to guide it into the net from eight yards, but instead he hit it straight at Adrian.

West Ham might have added to their lead after Byram headed across goal but substitute Andy Carroll’s shot came crashing back off the crossbar.

Sideline Cut: Sun Yang both casualty and culprit but China will move on 09:00
Unbeatable, unbackable, a hero: What’s next for the great Faugheen? 07:30
Michael Walker: Watford’s survival could be in good hands with Pearson at the helm 07:00
Irish squad in the dark as clouds hang over Six Nations 06:00
Weekend hurling previews 06:00

1 Getting behind the rotten core of rugby with Dan Tuohy
2 Football fan survey: Almost half of Irish adults say they support a club
3 Football fan survey: Manchester United still top the league among Irish fans
4 Ryan Baird scores a hat-trick as blue wave rolls over Glasgow
5 Matt Williams: Like on my Ryanair flight, Ireland were suffocated by England
Real news has value SUBSCRIBE