As Manchester United prepare to face Sunderland, their manager admits that, despite the huge spend on players, they haven’t exactly been worth their weight in goals 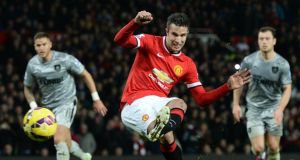 Louis van Gaal admits that, despite having a £100 million frontline, Manchester United do not have a striker who can score 20 goals this season. The manager puts the inability of Radamel Falcao or Robin van Persie to do so down to bad luck.

Falcao, whose total cost if a permanent deal is done with Monaco would be £50 million, has four goals; van Persie, signed for £24 million, has 10 goals; Wayne Rooney (£26 million) has nine goals.

United sit fourth, 13 points behind the leaders, Chelsea, and eight adrift of Manchester City. Asked if the difference between United and the two title favourites is that they boast superior strikers, the manager said: “It is true because I cannot deny it – Robin van Persie cannot deny it, Falcao cannot deny it and Rooney is not playing there much any more. We cannot deny that, at this moment, we don’t have a striker who scores 20 goals in the season.”

“This does not tell [us] anything about next year. They could be having an unlucky year and I have to decide, with my staff, if it is [this] or other aspects.”

Part of van Gaal’s footballing philosophy is to retrain players to use their brains rather than instinct. Ángel Di María, the British record £59.7 million signing, has struggled to find regular form this term, and the manager acknowledged that his demands are difficult not ononly for the Argentinian but for all his players.

Asked why elite players need to be retrained, van Gaal said: “Because every team has its own philosophy and then you have to play like that philosophy and that is why a lot of players are not fitting in that philosophy which is why some players are better with one club but not at another. When you buy players you need to give them time to adapt to the culture of England, to the rhythm of the Premier League, because that is a big difference to somewhere like Spain.”

For Sunderland’s visit to Old Trafford on Saturday Michael Carrick is available again after injury, though van Persie’s ankle injury will keep him out for at least two weeks.

“He is injured, the only injured player that I have. So, we change Carrick for van Persie. He has an ankle problem so I don’t think it is heavy, but an ankle problem takes a long time. It’s not one or two weeks, but we will have to wait and see,” the Dutchman said.

This could allow Falcao to be restored to the XI having not started in the 2-1 loss to Swansea City.

“The possibility is higher, of course, because when a striker is away another has to play,” said Van Gaal. – Guardian Service