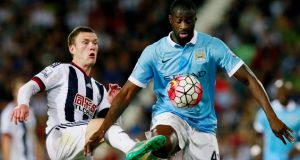 Manchester City’s Yaya Toure in action with West Brom’s Craig Gardner. City look a different side when the midfielder is firing on all cylinders. Photo: Jason Cairnduff/Reuters

As a declaration of presence, as a reminder of a forceful personality – even as a motto – Yaya Touré’s statement on Monday night following Manchester City’s 3-0 win at West Brom will take some equalling. “I’m not ‘back,’” Touré said, “I’m always there.”

Like the bell of the woman who used to sit behind Joe Corrigan’s goal at Maine Road, Touré’s words rang in the ears. City regulars recognised a twang, one that carried a resonance of which Touré was probably unaware.

One of the most conspicuous individuals at modern City, Touré’s words harked back to another time, to third division days back in 1998-99, when City finished third, five points adrift of Walsall.

Then fans would travel to see City lose at places such as Lincoln and York and stare in disbelief at their surroundings and the scale of their downfall. This was the club of Colin Bell; now they needed an 88th minute equaliser from Shaun Goater to grab a point at Northampton.

So they would sing:

Those last four words are spelled across a banner that still hangs at every City home game, which may well bemuse your average Abu Dhabi billionaire. When acclaimed photographer Kevin Cummins documented City’s last season at Maine Road, his book was titled: We’re Not Really Here.

It was an attitude steeped in irony, the produce of a decade and more of failure. Any ambitions City fans held then were in ashes. Meanwhile, across the road at Old Trafford . . .

This brings us back to Yaya Touré. In David Conn’s marvellous book on modern Manchester City – Richer Than God – he goes back through recent previous incarnations. He writes about those Peter Swales days, Francis Lee’s doomed takeover, Alan Ball’s out-of-time management and the waste of youthful talent as well as Niall Quinn’s first touch.

Conn speaks to Brian Marwood, then effectively City’s director of football, about the summer of 2010, when Touré arrived from Barcelona and Stephen Ireland went to Aston Villa.

Marwood explained the thinking: “The feeling was that we needed players of presence, quality, with a winning mentality, who had been around environments and knew how to win; it was that type of culture we wanted to bring to the football club . . . Yaya, who has won the Champions League, he can play four different roles, he is a quality player, he really is. When we knew he was available, it was a no-brainer.”

In Touré’s first season at City, the club won the FA Cup. It was City’s first trophy for 35 years.

The Premier League title would follow the season after and another in 2014. There was also the League Cup of 2014 – Touré scored the equaliser in the final against Sunderland.

So you can understand why, as he said on Monday night, Yaya Touré thinks he has always been “there”.

Yet as Roy Hodgson once said when under pressure at Liverpool: “I think that must be a gross simplification of the matter.”

If, as Touré claims, he has always been present and willing, how come City fans cheered his substitution against Villa in April? How come his talkative agent has often given the impression that Touré would rather be elsewhere – “90 per cent he’ll not be here next season”? How come City manager Manuel Pellegrini alluded to Touré’s form last season after West Brom?

The statistics show decreases in Touré’s output last season: one goal in January, for example, set against four the previous January. City won two of six games in January 2015; they won eight of nine in 2014.

This January Touré was at the African Cup of Nations, which his country, Ivory Coast, won. This was not a small deal for Africa or for the man himself and it was understandable that Touré, defending himself at the Hawthorns, mentioned it.

It will have meant more, perhaps, because of what happened during the World Cup. While Yaya and his brother Kolo were in Brazil, their younger brother Ibrahim died of cancer in Manchester.

The idea that this kind of tragedy is something that can be forgotten “once a player crosses that white line”, is flimsy.

Yaya Touré said something else on Monday: “Sometimes people have to understand we are human beings. Things can go wrong even when you’re fully focused.”

That was how he looked at West Brom and if he is the same against Chelsea on Sunday, Jose Mourinho may have something else to moan about.

Touré – and his agent – don’t always make it easy to like him (see birthday cake episode) but if City are to make up the eight-point gap on Chelsea from last season, then they really need Yaya Touré to be really there.