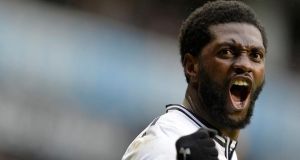 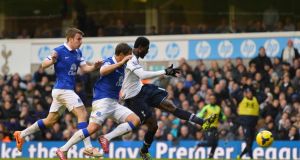 Emmanuel Adebayor gave Tottenham’s top-four hopes a timely shot in the arm as Tim Sherwood’s side rode a first-half storm to beat Everton.

Fourth-placed Liverpool heaped on the pressure with their 5-1 mauling of Arsenal on Saturday, making the second of this weekend’s battles between north London and Merseyside even more important.

Spurs appeared to be buckling under the pressure in the first half, but returned strongly after the break to secure a 1-0 win thanks to Adebayor’s low strike.

Sherwood spoke of the importance of improving their home form ahead of the match, but was left visibly frustrated as only wayward finishing and inspired goalkeeping from Hugo Lloris kept the score level at half-time.

Andros Townsend was brought on for his first appearance since December 18th in a bid to eke out a goal, which was set up by another England international.

Kyle Walker sent a quick free-kick into the path of Adebayor, who showed impressive skill and strength to control the ball before firing past Tim Howard.

Roberto Martinez’s side pushed on in search of a leveller and looked to have a strong penalty claim when substitute Etienne Capoue caught Seamus Coleman in stoppage time, but Tottenham got lucky to secure a win that sees them usurp the visitors in fifth.

Few would have expected a home win after the way Everton flew out of the blocks, with Leon Osman coming close four times inside the opening eight minutes.

The midfielder sent a warning shot across the bows with a curling strike shortly after kick-off and followed it up with a fine half-volley, which was destined for the net until a superb one-handed save by Lloris.

The England international headed over from the resulting corner and continued to prove a nuisance, although he wasted the easiest effort of the lot by firing straight at Lloris after neat work by the returning Steven Naismith.

Sherwood was understandably agitated by Spurs’ sloppy start, with a Mousa Dembele half-chance all they had to show for their endeavours until Christian Eriksen’s long-range free-kick dipped onto the roof of Howard’s goal. That, though, was all Spurs had to shout about in the opening 20 minutes as the visitors continued to pour forward.

Lloris, unaware the offside flag had been raised, produced another wonderful save to stop Kevin Mirallas converting a Leighton Baines cross, before the Spurs goalkeeper swept up after confusion at the back and Coleman had a tame effort saved.

Tottenham were struggling in all areas and had few moments of respite, although they came close to grabbing an undeserved lead as a low Danny Rose cross just evaded Adebayor.

It was a rare threatening moment from a side devoid of attacking ideas and sloppy at the back, epitomised by the ease with which Mirallas slalomed through on goal before firing over.

It was the last moment of note before half-time, from which the hosts returned with renewed intensity. A powerful Adebayor header, though, was all Spurs had to show for their improved performance, leading to the introduction of Townsend.

Laid low with a hamstring complaint for seven weeks, the flying winter replaced Eriksen after 59 minutes in a bid to add a new dimension to the Spurs attack. Townsend had barely had time to settle into proceedings when Spurs caught Everton napping to break the deadlock through Adebayor’s astute finish.

The relief inside White Hart Lane was palpable, especially as a timely Michael Dawson block denied Everton minutes earlier. Spurs were now looking composed, though, and Adebayor flashed a strike over as they looked to put the game out of reach.

Everton were not giving up and continued to press, with Lloris called into action to thwart a deflected Aiden McGeady cross. The onslaught continued and they had a strong stoppage-time penalty appeal waved away after substitute Capoue brought down Coleman as Spurs held out for the win — the ideal send-off for Jermain Defoe, who came on with six minutes remaining for his final league appearance at White Hart Lane before joining Toronto.