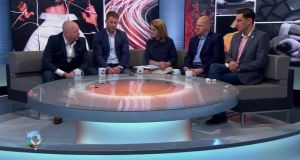 Three more people have come forward to say they were abused by a coach as young footballers.

Jason Dunford and Chris Unsworth, speaking to BBC’s Victoria Derbyshire programme, allege they were victims of Barry Bennell, a former coach who sexually abused boys across three decades from the 1970s onward.

The Guardian also reported on Thursday that an unnamed former Newcastle player had contacted police to make allegations against George Ormond, a coach in the northeast who was jailed for six years in 2002 for carrying out numerous assaults across a 24-year period.

Woodward, Walters and White have all said they were victims of Bennell, while Stewart said he was abused by another youth coach.

Bennell, who worked for Crewe, Manchester City, Stoke and several junior teams in northwest England and the midlands, was given a four-year sentence for raping a British boy on a soccer tour of Florida in 1994 and then a nine-year sentence for 23 offences against six boys in England in 1998.

He was jailed for a third time in 2015 when he pleaded guilty to abusing a boy at a soccer camp in Macclesfield in 1980.

Unsworth revealed he told his partner he had been abused by Bennell after seeing Woodward become the first person to speak out last week.

The former Manchester City and Crewe youth player, now 44, said: “I had never, ever told anyone until that moment.

“I sat the rest of my family down yesterday and told them too. Speaking out is liberating.”

Dunford, who like Unsworth has waived his right to anonymity, alleged Bennell attempted to touch him in bed while staying at a Butlins holiday camp after winning a soccer competition.

“I told him to get off me. After that, Bennell began to torment me - dropping me from the team, telling me I would play, but on the Sunday dropping me again,” he said.

Dunford, who left the Manchester City nursery team to join another boys’ team, also said another coach attempted to abuse him.

He said: “He had me and two others over to stay the night before a game, and we all stayed in the same bed.

“He started to touch me in the night. I pushed his hand away. Later I woke up again, and the coach was touching one of the other boys.”

Neither Unsworth or Dunford turned professional in the sport.

Football Association (FA) chairman Greg Clarke said he was “appalled” after finding out the governing body had failed to respond to Bennell’s conviction for sexual abuse.

Bennell, now 62, was the subject of a Channel 4 documentary called Soccer’s Foul Play in 1997.

The programme’s lead reporter, Deborah Davies, told the Press Association that few people in soccer wanted to talk about Bennell, that the FA refused all requests for interviews and said nothing after his conviction at Chester Crown Court.

“That is appalling,” said Mr Clarke, when that was put to him on Thursday.

Mr Clarke, who has only been in charge since August, told reporters at Wembley that the governing body was now taking the rapidly-growing scandal very seriously.

“We’ve got 8,500 safeguarding officers out there in the community and I wrote to 30,000 clubs today to raise their awareness,” said Mr Clarke.

“These are heinous crimes and they need to be investigated by the police and they will get our support.”

Mr Clarke was speaking after a meeting with Woodward, the former Crewe defender whose interview with The Guardian last week has been the catalyst for others to come forward.

Woodward, now 43, was one of the six players who testified against Bennell in 1998, but he has now waived his anonymity to speak freely about an ordeal that continues to overshadow his life.

Ex-Spurs, Liverpool and England star Stewart also revealed on Tuesday that he was abused as a boy by a different coach.

More victims are expected to speak out in the coming days.

Both Crewe and Manchester City have now started internal investigations into who knew what about Bennell and the extent of his links with the clubs.

Newcastle issued a statement on Friday which said: “At this time, the only information we have is that which appeared in The Guardian newspaper.

“Clearly Newcastle United will co-operate fully with the police and relevant authorities and provide every assistance we can if or when the club receives further information.

“The club would encourage anyone with information about possible child abuse in our game to report their concerns to the police, the football authorities or the NSPCC.

“The FA has commissioned in conjunction with the NSPCC a specific helpline for individuals who wish to come forward with further information. The number is 0800-0232642.”