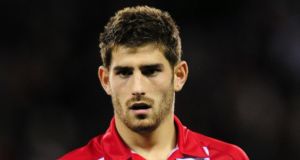 Thousands of people have signed an online petition against the prospect of Oldham Athletic offering convicted rapist Ched Evans a route back into football. (Photograph: Anna Gowthorpe/PA Wire)

Thousands of people have signed an online petition against the possibility of the League One club Oldham Athletic offering convicted rapist Ched Evans a contract, with the player potentially poised to make a return to professional football.

Evans left prison in October last year after serving half of a five-year sentence for raping a 19-year-old woman in a Rhyl hotel room in May 2011. The 26-year-old has consistently maintained his innocence in the wake of the guilty verdict, with an investigation into his conviction ongoing by the Criminal Cases Review Commission.

Evans has not trained or played for a professional team since leaving prison, yet third-tier club Oldham are reportedly close to providing him with such an opportunity. A deal could be announced on Monday although it is believed a contract has yet to be fully agreed.

The club were not responding to inquiries on Sunday but by early evening more than 13,000 people had signed the petition directed at the chairman, Simon Corney. It stated: “Currently Oldham is said to be considering signing him. This is a damaging message about rape and sexual consent to be giving to your fans. Please think again.”

Gordon Taylor, the chief executive of the players union the Professional Footballers’ Association, revealed on Sunday that Evans was in talks with an unnamed League One club.

He said: “The club are due to hold the press conference tomorrow and I’ve made it clear to them that I cannot attend tomorrow. Bearing in mind what happened with his release and then of course the furore that we had at Sheffield United we feel that any club wishing to sign him needs to be 100% committed to signing him for proper and legitimate football reasons.”

Taylor added on BBC Radio 5 Live: “We’ve made it clear in our statements that we feel he’s been unable to say much because of the appeals process, but he has served his time and the job of society is to look to rehabilitate.”

Evans’s last appearance was for Sheffield United in April 2012. The South Yorkshire club considered offering the striker a contract on his release from prison, making available the use of their training facilities, but after vociferous protests they backed down.

The Olympic heptathlon champion Jessica Ennis-Hill stated that she would want her name removed from a stand at the club’s Bramall Lane ground if they signed Evans, while a number of patrons associated with the club resigned and 160,000 people signed a petition in protest.

Following that uproar, the Hartlepool United manager, Ronnie Moore, revealed an interest in the Wales international in December, only for the club to rule out any deal.

Should Oldham allow Evans to train at the club or offer him a short-term contract it would represent a significant shift in their stance. In December the Lancashire side were linked with Evans but released a statement that read: “Oldham Athletic are aware of various newspaper reports linking the club to Ched Evans. The board of directors would like to confirm that we will not be extending an invitation for Ched Evans to train with Oldham Athletic nor will we be offering him a contract.”

In 2007 Oldham signed Lee Hughes, a forward who had recently been released from prison after causing death by dangerous driving.

The controversial Evans issue has divided opinion and there is significant opposition to a potential deal with Oldham. Some have argued that Evans has the right to be rehabilitated and begin his career again, while others believe his lack of public contrition is important.

The online petition, created by Jean Hatchet at change.org, states that Evans “does not deserve to return to a high profile and highly visible role in football whilst he still refuses to acknowledge his guilt”. Within one-and-a-half hours 5,000 people had signed it.

Last week the Maltese side Hibernians claimed to have offered Evans a contract but the Ministry of Justice stepped in to prevent a deal that could have seen the convicted rapist play abroad.

It said: “We are determined to have one of the toughest regimes in the world for managing sex offenders, to stop them re-offending and to protect victims. Probation officers must give permission for sex offenders on licence to take up new jobs and this includes ensuring they hold regular face-to-face meetings – this effectively rules out working abroad.”