Honours even between bosses but Van Persie revival continues for United 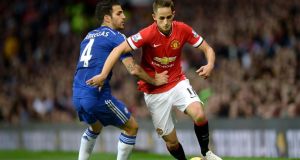 This was a chance to discover how adept Louis van Gaal remained at the club management game three seasons after his last post at Bayern Munich. In the visitors’ technical area was a protégé of whom before kick-off, Van Gaal said: “In football, contact continues – and contact is not so often. So we have to be careful with our relationship. It helps that I know him, but he knows me.”

By the close the Dutchman could be proud of United’s display as, in the dying embers of the contest, Robin van Persie smacked home the equaliser. What could this do for United’s season?

Chelsea stretch lead to six points over the champions

The result meant Manchester City would be at home kicking themselves for going to West Ham United and being beaten as they attempt to retain their crown. Chelsea are four points ahead of second-placed Southampton, who may well fall away; so to hold a six-point advantage over their closest serious rivals means that Mourinho’s men remain in the box seat to claim the championship. And the Manchester derby is up next.

Didier Drogba does it again on the big occasion

No Diego Costa and no Loïc Rémy meant the call went out to Chelsea’s 100 Premier League-goal man. Yet to register in the competition since returning, the Ivorian had his side’s best chance of the opening half. When he pulled the trigger with four minutes remaining only David de Gea’s legs stopped a 101st strike.

Minutes after the break, this arrived. From a Cesc Fàbregas corner the No 11 flicked in a header that Van Persie could only help on. Mourinho had said of Drogba: “He is a different player than the others.” Yes, but that old instinct for a finish remains undimmed.

Adnan Januzaj makes a case to be retained

The wunderkind of last season has been used only sporadically by Van Gaal but here he was named in the XI for a second consecutive game and the 19-year-old did not disappoint. After 24 minutes it was Januzaj’s slide-rule pass that played Van Persie in for a gilt-edged chance. As the first-half wound down Januzaj roved forward and belted a left-foot effort at Thibaut Courtois that was only marginally over. Later, he fooled Branislav Ivanovic into conceding a free-kick from which Juan Mata should have scored. As the jockeying begins for a starting berth in Sunday’s derby, Januzaj may be hard to leave out.

One moves too sideways, the other lacks sharpness but ended the game gloriously. As Mata and Van Persie continue to search for their best form each was threatened by the impending return of the suspended Wayne Rooney, who watched from the directors’ box sporting a beard and slicked-over hair.

The chance created for Van Persie by Januzaj would normally have been flipped over the advancing Courtois, while the nod-on of Drogba’s strike appeared to sum up his fortunes before his goal. For Mata the old questions remain: is he too lightweight and slow for an elite Premier League team? The Spaniard’s replacement in the second half by James Wilson was no surprise.