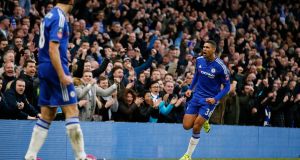 Roman Abramovich was all smiles from his lofty perch at Stamford Bridge. The Chelsea owner has long wanted to see some sort of return from the club’s academy, in which he has invested extremely heavily, and here, at last, was something to cheer.

Chelsea were 1-0 up against a game Scunthorpe United team but they were not safe and the League One minnows had complained bitterly at the failure to award a penalty on 53 minutes for a trip by Ramires on Kevin van Veen.

Enter Ruben Loftus-Cheek. The 19-year-old midfielder, the only genuine Stamford Bridge youth product in Guus Hiddink’s match-day squad, had come on at half-time for Oscar. After 68 minutes, he made his mark to ensure that Chelsea would be in the draw for the FA Cup fourth round.

His first goal in professional football was a poacher’s finish, guided home low with his left foot from César Azpilicueta’s cutback, after decent Chelsea approach work – and how Abramovich enjoyed it. It remains a source of frustration inside the club’s academy that the pathway to the first team appears as little more than a mirage and so Loftus-Cheek carries great responsibility. He handled it here.

Scunthorpe, too, handled the occasion. After being overrun in the game’s opening quarter, they found a way into the tie, on the back of wholehearted commitment and hard running. And if the referee, Craig Pawson, had seen Ramires’s challenge on Van Veen in another way, they could have fashioned a different ending.

Ramires had tracked the Scunthorpe player to the very edge of the Chelsea area and he then clipped his standing foot. Down went Van Veen and though he appeared to make the most of it there was contact. Pawson was unmoved; Scunthorpe were incensed.

Chelsea’s mission was to avoid what happened to them here in last season’s fourth round, at the hands of League One Bradford City, and they did so. Diego Costa had put them in front with his fourth goal in four games since José Mourinho’s sacking but Chelsea did not have it all their own way, despite Hiddink fielding a very strong lineup.

Scunthorpe were competitive until Loftus-Cheek’s goal – and even after it they refused to lie down. Van Veen banged a free-kick narrowly wide; Neal Bishop saw a shot blocked by Willian and, when they had recycled the play, the right-back, Jordan Clarke’s fizzing drive was turned on to the woodwork by Asmir Begovic and, at the very end, Bishop stabbed just wide.

Chelsea had taken charge at the outset, with Scunthorpe – who played five across midfield – initially finding it difficult to escape their half. Luke Williams was a willing lone frontrunner but whenever a yellow shirt made a tackle or an interception, the ball would come back.

Daniels kept his team in it, making two saves before the midway point of the first-half, the first a tip-over from Cesc Fàbregas’s pot shot and the second, an even more eye-catching one from Pedro, after the winger had taken down Fàbregas’s high ball over the top. Oscar also went close in the 22nd minute, having stepped over the ball and got it back from Costa. The midfielder opened up his body and bent narrowly past the far post.

Scunthorpe, though, stabilised after the opening quarter. Bishop kicked Fàbregas from behind and, when the Chelsea man turned around to remonstrate, the Scunthorpe midfielder shoved him in the chest. It felt as though the League One team realised that they needed to compete on a more physical level, to get closer to their opponents, and they enjoyed a fistful of what-if moments before the interval.

Stephen Dawson, the captain, had a ferocious shot repelled by Gary Cahill’s head – a brave piece of defending – while Williams quickened the pulses of the travelling supporters.

He worked Begovic – one of four Chelsea changes from last Sunday’s win at Crystal Palace – from outside the area while he capitalised on a Cahill error to steal into the area. Kurt Zouma came across to make a full-blooded slide challenge. Van Veen’s dangerous cross in the 45th minute also had just too much on it for Bishop.

Loftus-Cheek, such an imposing physical presence, played as the No10 and he was guilty of catching Bishop with a lunge shortly after he came on. But it was another clumsy challenge that made for one of the loudest talking points. With every replay, Scunthorpe fans were more and more convinced that Pawson ought to have penalised Ramires. Bishop and Dawson continued to mix it in midfield but it was Loftus-Cheek who put the tie beyond them.

Twice Carlisle led, through a Danny Grainger free-kick and a Mark Ellis header, but a Francois Zoko goal and Jeffers’ late effort made it 2-2.