Ex-players resulted in culture of propaganda under Alex Ferguson 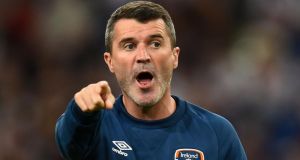 Roy Keane’s sustained criticism of Alex Ferguson extended to a new target during a night at Lancashire County Cricket Club to promote his latest book The Second Half when he delivered his inimitable assessment of the “mafia” of former players behind the scenes at United and mocked a culture which he says means no one bar him dares to speak out.

Former captain Bryan Robson was among the United old boys held up for ridicule as Keane used a mixture of humour and brutal one-liners to question whether Old Trafford had turned into a football version of Disneyland – under the name of “Man United Land”.

Paddy Crerand, a member of United’s 1968 European Cup-winning side, was also mocked as an example of the culture Keane believes existed under Ferguson.

Crerand is famously partisan but Keane also remembered how Robson had taken issue with him for saying Nani deserved to be sent off in the Champions League last-16 tie against Real Madrid in Ferguson’s retirement season.

“When I look at United there’s just a lot of propaganda now, a lot of nonsense gets spoken, a lot of ex-players now work for the club, they are on contracts, ex-players from the ’60s and ’70s working for United and they always try to kid you on,” Keane said.

“I had it with all the Nani stuff. My opinion was Nani meant it, he saw the guy coming, and he definitely meant it – the guy deserved to be sent off. But I remember Robbo the next day. Robbo, who works for Man United – great player he was, but he’s employed by Man United so he’s got to comment on Man United, and what do you think he’s going to say? ‘Keaney’ – and I can still remember saying him saying it like that – ‘Keaney was the only one at Old Trafford who thought it was a red card.’ Well, the f**king referee thought it was a red card.

“That’s why I took a step back from Man United. They’re all decent lads, don’t get me wrong, but it’s almost like a mafia situation. If you think it’s a sending-off or David Gill might be wrong or Alex Ferguson, you say it. These people are just: ‘It’s Man United, woh!’ It’s like Disneyland – Man United Land, with f**king Micky Mouse running everywhere.

“People get swayed by Paddy Crerand. Paddy still thinks it’s nineteen-sixty-f**king-seven! United have lost 5-0: ‘Ah, you know, they were great.’ Paddy, come on, do me a favour. ‘No, no, United were great.’ No, they weren’t! Why are you saying it?”

Keane admitted he now felt “really awkward” attending games at Old Trafford but at other times he spoke about the club with great affection, remembering his 12 years under Ferguson as “the greatest times of my life”.

Keane’s complaints extended to his disgust at hearing players from the two Manchester clubs sometimes go for dinner after matches now and that Wayne Rooney would apparently take on City’s players at Xbox. In his day, he said, that would never have been tolerated.

Once again though Keane was harder on himself than anyone else. He had mellowed with age, he said, although “the pilot light is on, just in case” and when he reflected on his drinking years, including a fight at Chester races with “a few Scousers”, he was glad that he did not come from the era when everyone had camera phones on nights out. “Jesus,” he said. “I’d be doing time.”