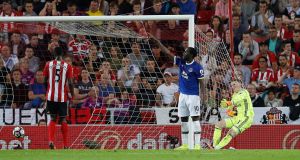 Romelu Lukaku reminded everyone that form is temporary but class permanent by registering a second-half hat-trick to give his side a comprehensive victory at the Stadium of Light.

Quite apart from pouring scorn on suggestions that Everton’s centre forward might have lost his scoring touch, the excellence of not only Lukaku but Yannick Bolasie and Gerard Deulofeu exacerbated David Moyes’s woes, leaving Sunderland with a solitary point from his first four games in charge. Their extraordinary defensive collapse does not bode well.

Can it really be four months since the May evening when Sunderland beat Everton 3-0 here to not only seal Premier League survival but relegate both Newcastle United and Norwich City? No wonder Sam Allardyce celebrated the final whistle by “dad dancing” across the pitch in a manner which made Strictly “star” Ed Balls look a seriously slick mover.

Much has changed since then. Allardyce and Roberto Martínez, in charge of Everton that night, have moved on to manage England and Belgium respectively, leaving Moyes and Ronald Koeman to fill their vacated seats.

If it was something of a poignant night for Moyes, who spent 11 years managing at Everton, it was also a bit of an anxious one as his Sunderland players sought their first league victory of the season.

The Scot feels his old Everton might conceivably have won the league had they only possessed a striker of Lukaku’s calibre so it was presumably with some trepidation that Moyes spotted the Belgium centre-forward hovering unmarked as Bolasie swung in a dangerous right-wing cross.

Sure enough Lukaku rose to meet it but Jordan Pickford proved why he is the England Under-21 goalkeeper by denying the striker his first goal of the campaign after palming that effort away for a corner. It was a good save but the striker knew he could have done better and looked suitably disgusted with himself.

Everton had enjoyed the majority of possession but endured an anxious moment of their own when Jermain Defoe -– who else? – stretched every sinew to connect with Adnan Januzaj’s deflected shot. Fortunately for Maarten Stekelenburg, Defoe’s left foot then directed the ball over the bar. With his pride perhaps hurt by this miss, the former England striker then, slightly bizarrely, appeared to demand that a linesman flag him offside.

After that things became a little scrappily haphazard for a time with Bolasie, ever menacing down the right, often looking a cut above those around him. Or at least until Sunderland began double marking him at every opportunity.

Unlike most of his predecessors here, Moyes has displayed a refreshing willingness to offer young academy players first-team chances with Lynden Gooch – a 20-year-old Californian midfielder – having established himself as an ever-present. For all Everton’s hogging of the ball, Gooch generally did pretty well and very nearly scored when his right-footed cross-shot from the left looked to be about to steal in under the bar before a startled Stekelenburg performed acrobatics to divert the danger.

As the second half began the temperature remained at a balmy 20 degrees centigrade. If that was virtually unprecedented for a mid-September Wearside evening, it was no surprise to see Koeman introduce Deulofeu. The winger replaced a disappointing Ross Barkley, whose imagination and incision looked to have deserted him.

Deulofeu’s arrival on the right enabled Bolasie to switch to the left and the pair soon began stretching Sunderland. Set up by the former Bolasie forced Pickford into a diving save but, on a counterattack, Moyes’s players might have scored with Lamine Koné – an Everton target this summer – prompting a decent save from Stekelenburg after rising above Phil Jagielka at a corner.

Shortly afterwards Wahbi Khazri, newly on for Gooch, conceded possession to Deulofeu who initiated a game-changing counterattack. It concluded with Idrissa Gueye seizing on a deflected pass and crossing to an unmarked Lukaku. This time, he made no mistake, heading emphatically beyond Pickford.

Suitably invigorated. Lukaku tested the bar’s strength courtesy of a ferocious shot but he was still warming up. Goal number two arrived when Bolasie, even better on the left, dodged Javier Manquillo and crossed impressively once more in the direction of a – yet again – unshadowed centre forward. Lukaku needed no invitation to further punish Pickford with another thumping header.