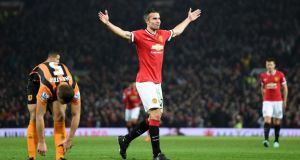 Manchester United’s Robin Van Persie insists he is back to his best and has denied suggestions he is over the hill. Photograph: Martin Rickett/PA Wire

Robin van Persie insists he is back to his best and has denied suggestions he is over the hill. Van Persie will look to continue his recent good form on Sunday when Manchester United host bitter rivals Liverpool.

The arrival of Radamel Falcao, and Wayne Rooney’s appointment as captain had led some to question the 31-year-old’s place in the starting XI. The striker looked a shadow of the man who scored 29 goals in his debut year at Old Trafford at the start of this campaign. But after scoring three goals in his last three games — including a match-winning brace against Southampton — Van Persie believes he has reached peak form again, which is handy for United ahead of their biggest home fixture of the season.

“When you hit 30 and you’re having a bad spell everyone say it’s because you’re 30 or 31 and things might be over for you,” the United striker told MUTV.

“I live a quiet life for my football and I’m almost convinced now that I will play for many years to come at the highest level, at least that’s what I want and what I’m aiming for.

“The age thing is not an issue for me at all.”

Van Persie’s poor showing at the start of the season was something of a mystery given his excellent displays under Louis van Gaal at the World Cup. Van Persie scored one of the goals of the tournament during the group stages when he fired a superb diving header over Iker Casillas during Holland’s 5-1 shock win over Spain.

Van Persie says playing every game for the Dutch in the World Cup took its toll on him and he suffered as a result when the domestic season began.

“It was a hard start to this season,” Van Persie said. “It’s hard to maybe pick things up straight away after the World Cup. It can be tough to really get back to your best form.

“But over the past couple of weeks I’ve been feeling very well physically. I feel like I can make more runs and keep things going up until the last bit of the game. I feel good and I don’t think it’s a coincidence that the goals are flowing in much better now.”

Van Persie was part of the United team that was hammered 3-0 by Liverpool in March.

It was one of the most embarrassing results of last season and was one of the reasons why David Moyes was sacked two months later. Moyes, unforgivably in the eyes of some United fans, said Liverpool were the favourites to win the match before kick-off, but this time it is the hosts who are being tipped for victory.

After a run of five straight wins, United have shaken off their early-season disappointment and are now just eight points below Barclays Premier League leaders Chelsea. But Van Gaal, never happy with anything but the best, is still not satisfied with the fact that his team are third in the standings behind Chelsea and Manchester City.

“I dream for Manchester City’s place or Chelsea’s place,” the Dutchman admitted, frankly. “(But) now we have to live match for match and that is the most important thing.”

Van Gaal got a little taste of the rivalry between United and Liverpool in pre-season when the two teams met in Miami for the final of the International Champions Cup.

United cook Mike Donnelly made it clear to United’s new manager just how important it was to get one over on their rivals that day even though the match was a friendly.

“Even on the tour of the United States, all the members of my staff were (talking about the rivalry with Liverpool),” Van Gaal said. “We have a cook and his name is Mike and when I don’t know about anything to do with United and rival clubs he shall say it.

“He is a big Manchester United fan and I hear immediately from him.”