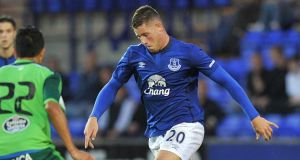 Roberto Martinez fears he could be without Ross Barkley for up to five months.

The England midfielder damaged the medial ligament in his right knee in training one day before their opening Barclays Premier League match against Leicester, which ended in a 2-2 draw.

Everton will have to wait to find out the full extent of the damage but Martinez knows he could be without one of his key players for a large chunk of the season.

The Toffees boss said: “He had a scan but it was a bit difficult to determine the extent. With the swelling we don’t really know how bad the injury is.

“We know it’s a partial tear but that could be anything between seven weeks and I’ve seen injuries like that that take four or five months.

“Ross Barkley is a phenomenal footballer and we’re going to miss him, there’s no doubt about it. He was so sharp in pre-season, I thought he came back with a different approach.

“He was very unfortunate to (sustain the injury) through an innocuous challenge in training and now he’s going to be out for a long, long time.

“The squad should be big enough to be able to cope with losing a player and be able to perform well, but it’s a disappointing moment when Ross Barkley was going to have a really big start to the season.

“Now it’s coping with the frustration and allowing him to come back when he’s fully fit and ready for whatever’s left in the season.”

The injury is also a blow to England, with Barkley looking certain to miss the Euro 2016 qualifiers against Switzerland, San Marino and Estonia at the very least.

Barkley is no stranger to serious injury having broken his leg in three places on England Under-19 duty in 2010.

Martinez backed the 20-year-old to cope with his latest setback, saying: “He’s a very mature boy. “He was very disappointed because he was looking forward to the start of the season and he put a lot of extra work in because he came back from the World Cup with a real desire to start the season well.

“He’s been through periods of bad adversity before and he knows how to cope with that.

“As a football club we’re going to be with him and make sure that he’s not suffering too much while he’s away. I think the ones that are going to suffer is us.”

Six Nations talking points: Garry Ringrose has his mojo back