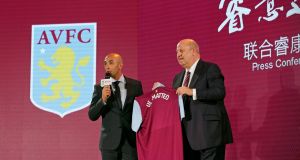 The situation at Aston Villa was so wretched following their recent relegation that Roberto Di Matteo has admitted he felt the need to demolish the entire house and begin a complete reconstruction of the 142-year-old club.

Speaking to the Guardian in Beijing, where he is accompanying Villa’s new Chinese owner on a three-day visit, the former Chelsea manager said he was determined to rebuild the Birmingham club from the foundation up so that it could bounce back into the Premier League within two years.

“[It was] a house that needed to be knocked down and start afresh,” Di Matteo said of his first impressions after taking over at Villa Park last month. “That’s so far what I have seen.”

But the manager conceded that escaping the Championship, which he compared to a gruelling marathon, would not be easy.

“You have to kind of sustain a level of performance in the Championship to be able to come out of it at the end of the season.”

Di Matteo took over the club last month after the Chinese tycoon Tony Xia bought Villa for a reported £75 million. In one of his first interviews after the purchase, Xia said he would transform the relegated club into one of the world’s top sides in less than a decade.

“Forget the past and think we are going to enter into a new age,” he told fans.

Wyness told Chinese journalists the club’s leadership was set on building a “great football dynasty” under Di Matteo, and wanted to make Villa one of the most popular European clubs in China.

“The lion has been asleep for the last four or five years and we want to be sure with Roberto and his team that we wake the lion,” he said.

“Under Roberto we have a very, very talented, very bright manager, and we want to establish a style of play that Roberto can give the squad,” added Wyness, Everton’s former chief executive.

“Every great football dynasty starts with a definitive style of play, and we want to develop our own Villa style as we go forward.”

Di Matteo was more cautious. He described Leicester City’s historic Premier League title, which came only two years after the club’s promotion, as a “unique story” that Villa should not expect to replicate.

“By signing three new players we have already identified players that we believe will help us guide the team into a very challenging season.”

Di Matteo said he still wanted to “trim” his squad but hinted he had not yet given up on all of last year’s underperforming senior players such as Gabriel Agbonlahor. “I don’t think it is fair to judge people just on what happened in the last 12 months.”

Asked how many players he would seek to bring in before the club’s season kicks off on August 7th, the Villa manager said: “I don’t want to put it into numbers. I’m certainly looking to freshen up the squad… I don’t know if it is one more, three more or four more.”

Di Matteo did not rule out importing Chinese players from the Middle Kingdom to the West Midlands now Aston Villa are in Chinese hands.

“Obviously if there is a Chinese player that has the quality and the ability we will certainly be looking to recruit...I think the main focus is to get promoted with Aston Villa. That is the main focus of the chairman, the owner and everyone involved in the club.”

The former Lazio and Chelsea midfielder said one of his greatest challenges at Villa Park would be restoring confidence to the players after one of the club’s most catastrophic seasons. “It scarred them a little bit what they experienced last season. A lot of them probably had their worst experience in football terms last season and it’s something they will have to overcome.”

However, Di Matteo said he has not yet lost sleep over the scale of the task. “So far I have had very good nights’ sleep. I’m generally an optimistic person.”

Xia (39), a tycoon from Zhejiang province in eastern China, told reporters he saw his acquisition as a way of helping expand his “health industry business” which includes a newly created brand of energy drinks.