Massimo Cellino did not pay €400,000 in import tax a yacht seized by Italian authorities 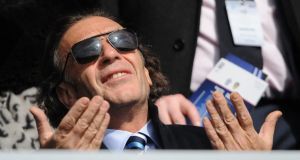 Massimo Cellino’s proposed takeover of Leeds United is likely to be blocked by the Football League after the Italian businessman was found guilty of illegally evading import duty on a luxury yacht.

Cellino, who has been bankrolling Leeds since his 75 per cent takeover of the Championship club was announced in February, was fined €600,000 after a court in Cagliari convicted him of failing to pay €400,000 in import tax on Nelie, a yacht seized by Italian police and customs officials in Sardinia.

The League’s “fit and proper persons” rules prohibit people with unspent convictions for dishonesty offences from being directors, 30 per cent owners or from exercising control over one of its clubs. Last week, they delayed a decision whether to ratify Cellino’s takeover to wait for the outcome of his trial but have promised to rule by the start of next week.

Cellino’s sentence – in which judge Sandra Lepore also ordered the confiscation of the vessel – was lower than the €1.165 million fine requested by prosecutor Andrea Massidda, with the court citing non-specific mitigating circumstances.

But Giovanni Cocco, Cellino’s defence lawyer, said his client – who was not in court – would “certainly” be lodging an appeal against it.

“This verdict is absolutely unjust and we will appeal,” he told the Guardian after the brief court session.

According to Italian legal practice, the judge did not explain her ruling and has 90 days to do so.

Cellino, born and brought up in Cagliari and long-time owner of its football club, denies that he was seeking to evade import duty on the yacht. He told the court in December that he had intended to have it sailed to the United States, where he had bought it, but was unable to due to damage it had sustained.

Nicknamed the “King of Corn” for his past successes in the agricultural sector, Cellino has been under investigation by the Football League since the announcement of his proposed takeover through his holding company Eleonora Sports.

Miami-based Cellino has a 2001 conviction for false accounting – for which he was given a 15-month suspended sentence – and is under investigation for alleged misuse of public funds relating to work on Cagliari’s Quartu Sant’Elena Stadium. He denies any wrongdoing.