Injuries and suspensions updates ahead of the weekend action 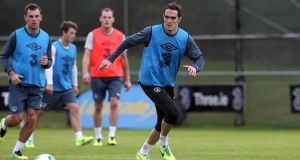 Norwich (16) v Liverpool (9), 12.45pm - Live on BT Sports 1
New Norwich signings Steven Naismith and Ivo Pinto are both expected to be in the squad. Manager Alex Neil will also make a late decision on whether to include Swiss defender Timm Klose, who joined the Norfolk club from Wolfsburg earlier this week, but otherwise the Canaries report no fresh injury problems following the defeat at Bournemouth. Midfielder Gary O’Neil continues to serve a three-match ban following his red card at Stoke, while on-loan Liverpool defender Andre Wisdom is ineligible to play against his parent club.

Adam Lallana is a doubt for Liverpool’s trip to Carrow Road with a minor muscle problem. Manager Jürgen Klopp will revert to his strongest line-up having made numerous changes for the midweek FA Cup win over Exeter. His main decision will be over whom to play up front as Christian Benteke was involved in two of the midweek goals but looked desperately short of confidence and Roberto Firmino has been the preferred option in a false nine role.

Crystal Palace (8) v Tottenham (4)
Dwight Gayle (hamstring) will not feature for Palace on the instructions of the club doctors. Eagles boss Alan Pardew intends to play Wayne Hennessey in goal despite describing him as “battered and bruised” but Yannick Bolasie (hip/thigh), Damien Delaney (knock) and Kwesi Appiah (knee) are all unavailable.

Ryan Mason will miss the trip to Selhurst Park as he continues to struggle with his niggling ankle problem. Manager Mauricio Pochettino should restore a number of regulars after mixing up selection for Wednesday’s 2-0 FA Cup third-round replay victory at Leicester.

Leicester (2) v Stoke (7)
Leicester manager Claudio Ranieri will revert to a familiar starting line-up after making nine changes against Tottenham in the FA Cup in midweek. Ritchie De Laet was due to start Wednesday night’s third-round replay but withdrew after suffering a groin injury in the warm-up and the right back is a doubt. Matty James (knee) is nearing a return but Jeffrey Schlupp (hamstring) will not be back until towards the end of February.

Stoke winger Xherdan Shaqiri could make his return to action after being sidelined by a hamstring injury. Potters boss Mark Hughes is also monitoring a similar issue for forward Marko Arnautovic. Hughes will definitely still be without Geoff Cameron (ankle) and Shay Given (knee) for what is the first of four away games for the Potters in quick succession, but Stephen Ireland, Marc Muniesa and Phil Bardsley are all now fit for selection.

Manchester United (5) v Southampton (10) - Live Setanta Sports 1
Louis van Gaal has suffered more injury woe with the news that Ashley Young requires surgery on a groin injury and could be ruled out for the rest of the season. Young limped out of last week’s 1-0 win at Liverpool just before half-time and he has now become the fourth of Manchester United’s full back options to be ruled out ahead of Saturday’s match with Southampton. Bastian Schweinsteiger remains sidelined with a knee injury and Phil Jones (ankle), Antonio Valencia (foot), Luke Shaw (leg), Marcos Rojo (shoulder) and Michael Carrick (knee) are also still out.

Southampton have added Charlie Austin to their squad for the trip to Old Trafford. The striker, a €5.3 million signing from QPR last weekend, has proved his fitness following a recent hamstring injury. Graziano Pelle is a doubt with an ongoing knee problem while Jay Rodriguez (foot) and Florian Gardos (knee) are still on the sidelines.

Sunderland (19) v Bournemouth (15)
Dame N’Doye could be handed a Sunderland debut after the striker signed on loan from Turkish side Trabzonspor for the rest of the season, with Steven Fletcher reporting illness on Thursday. Full back DeAndre Yedlin returns after being ineligible for last weekend’s trip to parent club Tottenham, while defender Younes Kaboul (hamstring) and midfielder Sebastian Larsson (knee) are still out.

Record signing Benik Afobe will undergo a late fitness test in his bid to lead Bournemouth’s attack. The former Wolves forward limped out of last weekend’s 3-0 win over Norwich and faces a race against time to play against the Black Cats. Bournemouth will also run the last-minute rule over Matt Ritchie (hip) and Josh King (hamstring).

Watford (12) v Newcastle (18)
Forward Nordin Amrabat could make his debut for Watford after he completed his €8 million move from Malaga earlier this week. Goalkeeper Costel Pantilimon, a new signing from Sunderland, is also likely to be included in the matchday squad. Defenders Tommie Hoban (groin) and Joel Ekstrand (knee) remain unavailable.

Newcastle boss Steve McClaren is facing a defensive crisis. Left backs Paul Dummett and Kevin Mbabu have hamstring injuries and Jack Colback, who filled in last weekend after Dummett’s premature departure against West Ham, is out with a similar problem, leaving Daryl Janmaat, Chancel Mbemba, Fabricio Coloccini and Jamaal Lascelles as his only match-fit senior defenders.

West Brom (13) v Aston Villa (20)
West Brom boss Tony Pulis described his squad as “threadbare”. Chris Brunt (calf), Jonas Olsson (hamstring) and Darren Fletcher (knee) look to set to miss the derby clash at the Hawthorns on Saturday alongside long-term absentee James Morrison, who will be absent for around two months with a hamstring injury. Sebastien Pocognoli, who replaced Brunt against Bristol City in midweek when he went off injured, and Victor Anichebe could keep their places in the team as Albion attempt to complete a league double over Villa for the first time in 42 years.

Remi Garde is likely to stick with the team that earned four points from the home matches against Crystal Palace and Leicester, meaning he will make nine changes from the side he sent out for the FA Cup third-round replay with Wycombe in midweek. Midfielder Carlos Sanchez will undergo a fitness test but full-back Alan Hutton (hamstring) remains out while striker Gabriel Agbonlahor, who has played only one minute of football since Garde took over at the beginning of November, is also likely to be missing again after reporting a new injury problem.

West Ham (6) v Manchester City (3), 5.30pm - Liver Sky Sports 1
Manchester City have Fernandinho back available. The midfielder has missed the last three games due to a muscle injury but returned to training this week and has been passed fit for the match. Aleksandar Kolarov has been ruled out after coming off in the 4-0 win over Crystal Palace with a calf problem, and joins fellow defenders Eliaquim Mangala (hamstring) and Vincent Kompany (calf), plus midfielder Samir Nasri (hamstring) and striker Wilfried Bony (calf) on the sidelines.

James Tomkins is an injury doubt for West Ham. The defender sustained a knock in the 2-1 defeat against Newcastle and trained individually on Thursday and faces a late fitness test. Joey O’Brien is back in contention after recovering from a long-term injury, but Andy Carroll (hamstring), Diafra Sakho and Manuel Lanzini (both thigh) remain sidelined.

Everton (11) v Swansea (17), 1.30pm – Live Sky Sports 1
Everton midfielder James McCarthy and defender Seamus Coleman have returned to training this week but may not be quite ready. McCarthy has played just once since late November because of a groin problem while Coleman has missed three matches with a calf injury. Midfielder Tom Cleverley, an unused substitute at Chelsea last weekend, may get a run-out while there are no injury worries over Steven Pienaar or Bryan Oviedo.

Swansea have a fully fit squad to choose from. Ashley Williams (knock) and Wayne Routledge (dead leg) have trained and are available for selection. The match will see Swansea’s head head coach Francesco Guidolin in the dugout for the first time.

Arsenal (1) v Chelsea (14), 4.0pm – Live Sky Sports 1
Arsenal could welcome back both Alexis Sanchez and Mesut Özil. Sanchez has been missing since November with a hamstring issue and Özil sat out last weekend’s draw at Stoke due to a foot injury – but the pair are expected to start against the Blues. Mohamed Elneny is still awaiting his Arsenal debut with fellow midfielder Francis Coquelin back in training following a knee injury, but he will not feature against Chelsea, and nor will Danny Welbeck, Santi Cazorla (both knee) or Jack Wilshere (leg).

Eden Hazard and Diego Costa could play for Chelsea. Belgium playmaker Hazard has missed the last three matches with a groin injury, but returned to training this week. Striker Costa suffered a bruised shin against Everton last Saturday, but is also in contention to feature, while striker Radamel Falcao (thigh) remains out.