Toffees move ahead of Arsenal, vital wins for Fulham and Cardiff 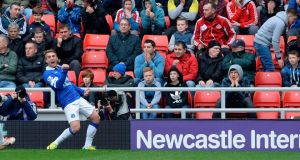 Wes Brown’s own goal took Everton into the Champions League places as Sunderland’s relegation fears took a turn for the worse after a 1-0 defeat at the Stadium of Light.

It was tough on Sunderland, who gave as good as they got for long periods before slipping to a fifth successive league defeat and with just six games left in which to pull off an escape of increasingly epic proportions.

But Everton, who had earlier seen Steven Naismith pass up two glorious opportunities to fire his side ahead at the Stadium of Light, got there in the end to leapfrog Arsenal into the top four.

Hugo Rodallega’s first-half goal was enough to give Fulham a crucial 1-0 victory in their pursuit of league survival and condemn Neil Adams to defeat in his first game as Norwich manager.

Rodallega’s close-range finish in the 40th minute gave the Cottagers their second consecutive win for only the second time this season and moves them to within two points of safety with four matches to play.

Norwich, who have now lost their past seven away fixtures, arguably had the better chances in a pulsating contest at Craven Cottage but the visitors lacked incision in the final third.

The Canaries now face an unenviable task to hold off their relegation rivals with their remaining games coming against Liverpool, Manchester United, Chelsea and Arsenal.

Stoke boosted their hopes of a top-10 finish and increased the pressure on Alan Pardew with a 1-0 victory over Newcastle at the Britannia Stadium.

The Potters have never finished in the top 10 before but are now only three points behind Newcastle in ninth and four points short of their record tally of 47 points.

They needed a stroke of good fortune to seal the win, though, with Erik Pieters’ 42nd-minute strike certainly intended as a cross.

It was the Dutch full-back’s first goal for Stoke and his first in any competition since he played for FC Utrecht six years ago.

Newcastle have now lost four successive games, conceding 12 goals and scoring none, and there were calls for Pardew’s head from the sizeable travelling support.

Although Tony Pulis may still not admit it, his Crystal Palace side are all-but safe after earning a deserved 1-0 victory over a poor Aston Villa side at Selhurst Park.

Jason Puncheon’s second-half goal was enough to settle the game, meaning the Eagles remain seven points clear of the relegation zone with just five games left of the season.

It also takes Palace above Villa in the table, with Paul Lambert seeing his side slip to within four points of the bottom three after a fourth successive defeat and without an away win since New Year’s Day.

The game in south London started at a pace that suggested the game was being played at the end of the season with both sides already planning their summer holidays.

Villa laboured for the majority of the game and Palace did eventually move through the gears. But for wasteful finishing from Yannick Bolasie and Cameron Jerome, they would have been out of sight before Puncheon’s 76th-minute winner.

Ole Gunnar Solskjaer’s side were seen as relegation certainties heading to St Mary’s, yet they secured an invaluable win against the odds.

This was just Cardiff’s third league victory in the last four months and saw the league’s worst travellers secure just their second win on the road this term.

It was the perfect response to the controversy surrounding claims in the build-up that last week’s team that lost 3-0 to Crystal Palace had been leaked to their opponents.

The Welsh side looked set to suffer a similarly large defeat at St Mary’s after a woeful first half in which Gaston Ramirez rattled the crossbar.

However, wayward finishing and a fine display from goalkeeper David Marshall kept the hosts at bay, allowing the away side to sneak an improbable win from a surprising source.

Having failed to clear their line, Cala — one of four changes from last weekend’s embarrassing loss — showed poise and skill few would expect from a centre-back to strike home from the edge of the box.

Mauricio Pochettino’s side pressed for a late leveller but it was not to be as they failed to score for just the sixth time this season, giving Solskjaer’s men a huge three points.

And Christian Eriksen scored an injury-time equaliser as Tottenham completed a remarkable comeback from 3-0 down to draw 3-3 at West Brom.

The Baggies had looked like boosting their survival hopes as they raced into a 2-0 lead at The Hawthorns through goals from Matej Vydra and Chris Brunt inside the first four minutes.

Ben Foster then saved a penalty from Spurs’ Emmanuel Adebayor before Stephane Sessegnon added a third for West Brom.

But Tim Sherwood’s men were not finished, pulling one back as Jonas Olsson deflected a Kyle Naughton cross past Foster before the break and Harry Kane headed a second.

Spurs still had 20 minutes to find an equaliser and Eriksen provided it in the fourth minute of injury time to deny West Brom a first home win under Pepe Mel.