Phil Jones: Chris Smalling and I silenced the critics at Manchester United 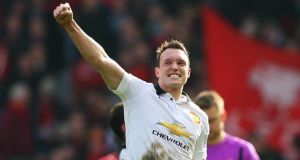 Manchester United’s Phil Jones has claimed he and Chris Smalling have silenced their critics following the pair’s impressive displays in the recent wins over Tottenham and Liverpool.

“We have proved people wrong,” said Jones. “People can assume and predict and it is up to us to prove them all wrong. People criticising does spur you on. You are always going to get critics.

“We are at a massive club here at Manchester United and if things aren’t going as well as they should be then there is always going to be people wanting to have a dig and a pop at you. We just take it on the chin. It is water off a duck’s back to us. If we continue to produce performances like this week and last then I am sure we will be fine.”

But the defender has struggled with injuries and has been criticised for his form. Smalling and Jones have frequently been played as full-backs and in midfield, rather than in their preferred position in central defence.

Having played with a three-man defence for much of the season, manager Louis van Gaal switched to a back four earlier this month, with Jones and Smalling at the heart of it, and the Dutchman has been richly rewarded for his faith in the England duo.

“It had been documented that me and Chris were going to be the next centre-backs at United but it has not gone how we would have liked it,” added Jones.

“Somebody told me the other day that we have actually only played alongside each other about four times in four seasons. You cannot build a partnership on four games. Hopefully now we have had back-to-back games together we can keep it going and keep playing well together. We complement each other well.” – Guardian service