Oldham must choose between money and morals 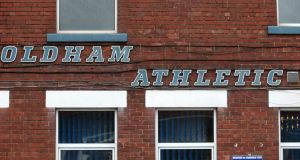 Oldham Athletic, a homely sort of club, have appeared frozen in the spotlight of scrutiny and adamant opposition to their plan of signing Ched Evans despite his conviction for rape, which they finally acknowledged they are considering in a belated statement. The club’s board may previously have felt they could walk through the storm by relying on a basic justification, perhaps similar to that offered by the Professional Footballers’ Association chief executive, Gordon Taylor: Evans has served his time in prison and has a right to work.

That is true, yet his legal status is more complex than that, even before considering the moral objections to his re-employment in the hallowed game of football so soon after his release, having shown paltry contrition for what he did. Oldham ought to say whether they thought much about this before the uproar, in response to which their statement finally said they will carry out due diligence. That accountant’s phrase shines an unintended pointer to where football clubs’ priorities, for all their community programmes and claims to fans’ sentimental loyalties, too often lie.

The attorney general’s office has confirmed the website, bankrolled by Karl Massey, the wealthy father of Evans’ girlfriend – now and at the time of the rape – Natasha, is itself under investigation. A senior lawyer is examining whether the website unlawfully identifies Evans’ rape victim and commits criminal contempt of court. Victims of sex offences are legally entitled to lifelong anonymity but this young woman has reportedly been forced to change her identity five times after being named on the internet, and Evans’ supporters’ website encourages continued hostility to her.

The woman was 19 when Evans was found to have raped her in a Premier Inn room in 2011 that he had booked for use during a night out in Rhyl with his friend, Clayton McDonald, also a footballer, who brought her there after bumping into her in a kebab shop at 4am. The website shows CCTV footage of her and McDonald arriving, over which it invites the public to “Judge for yourself” whether she was so drunk as to be incapable of consenting to the sex that Evans had with her after he arrived in the room and she was asked if he could “join in” with McDonald. The jury that heard the evidence found she was too drunk to consent to sex with Evans, while acquitting McDonald of rape.

The woman’s father has complained that the footage, by only blurring her face, leaves her identifiable, which is a specific criminal offence. The website, maintaining Evans’ innocence, also makes adverse references to the victim’s reputation, despite this evidence having been ruled inadmissible in court. A long narrative about the trial, which argues the verdict was perverse, concludes by reporting, in that context, that the prosecutor, John Philpotts, turned to Evans’ family and said: “I am so sorry.”

The Crown Prosecution Service told the Guardian that Philpotts was essentially showing some human consideration: “Mr Philpotts expressed understandable empathy for the distress which the family of a defendant had clearly felt during the trial and at its conclusion. He did not apologise for the properly brought verdict in this case.”

Such human consideration, understanding and empathy remain alarmingly lacking in Evans’ public posture and his supporters’ continuing vilification of the victim with whom he and McDonald both had sex then left alone, asleep and intoxicated, without belongings, in a strange hotel room.

Clearly, while Evans protests his innocence, and with his case being considered by the Criminal Cases Review Commission, as is his right, he cannot be expected to apologise for committing the crime of rape. However, his defence relies narrowly on attacking how drunk the victim was and whether, therefore, she consented. He does not dispute that he and McDonald behaved in ways that have given modern young British footballers notoriety, despite all their club and PFA-sponsored, role-model community work. For his conduct towards the victim on the night, her trauma since and ongoing hell, he has shown no contrition nor sign of empathy.

It is also not quite correct that he has served his time. He was given a five-year sentence and was released from prison in October after serving half of it inside. So he is serving the rest of it currently, on licence, until April 2017. He must report to his Probation Service offender manager in person regularly, usually every week. That was why the Ministry of Justice made clear at the weekend Evans could not leave the country to play for a club in Malta.

Although licence conditions are not made public, the MoJ emphasised that exclusion zones, non-contact orders and compulsory treatment programmes are common. Because Evans’ sentence was longer than 30 months, if his conviction is not overturned he will be on the sex offenders’ register indefinitely. He may be subject to other conditions, including governing contact with young people, which could be difficult at a football club that coaches boys from childhood.

Oldham’s directors need their due diligence to be more than it currently appears: weighing up the benefits of acquiring a £3m striker on the cheap with the reputational damage of it being Ched Evans. They need to show human and moral understanding, or clubs’ claims to be community organisations, with their funded programmes designed to teach children literacy and wellness through the elixir of football, will seem like empty marketing.

As for Evans, he needs to receive some decent advice. When his case review is concluded, if his conviction is overturned, he will have a much better claim to employment. He would still need to show contrition, empathy, humanity. He could, in the meantime, have that website taken down and call the hounds off the victim. Professional football, and Evans, a product of it, really ought to know already there is more to rehabilitation than coming out of prison.