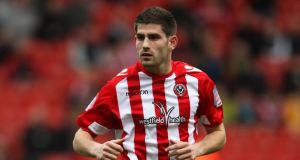 Oldham Athletic have denied they have offered convicted rapist Ched Evans the chance to train with the club.

Reports on Sunday linked Evans with the League One club, but Oldham confirmed on Monday morning that they will not be offering the former Sheffield United striker an invitation to train with them or a contract.

Evans, 25, wants to return to football after being released from prison last month. He served two and a half years of a five-year sentence after being found guilty of raping a 19-year-old woman in 2011.

A statement released on the club’s official website read: “Oldham Athletic are aware of various newspaper reports linking the club to Ched Evans (on Sunday).

“The Board of Directors would like to confirm that we will not be extending an invitation for Ched Evans to train with Oldham Athletic nor will we be offering him a contract.

“The club will not be making any further comment on this subject.”

League Two side Tranmere Rovers announced on Thursday that they had opted not to take up the chance to meet with Evans to discuss the possibility of him training with them.

Tranmere chairman Mark Palios claimed to have turned down an approach from associates of Evans.

Evans continues to protest his innocence and has lodged an appeal with the Criminal Case Review Commission.

He was initially given permission by former club Sheffield United to return to train with them at the request of players’ union, the Professional Footballers Association.

But following a backlash from Blades supporters, sponsors and patrons opposed to Evans’ return — 160,000 people signed a petition against it — the club retracted its offer late last month.

PFA chief executive Gordon Taylor initially argued that Evans had the right to continue his rehabilitation by resuming his career with Sheffield United.

Taylor has since conceded it would be in the player’s best interests to seek employment with another club.