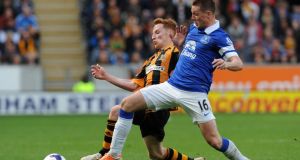 After a lifeless first half Norwich slipped down to the Championship without much fuss as Arsenal cruised to a 2-0 victory at Carrow Road.

The Gunners, who can be forgiven for having one eye on next week’s FA Cup final, wrapped up the win with goals from Aaron Ramsey and Carl Jenkinson.

Hull, Arsenal’s opponents in next week’s cup final, signed off their campaign with a 2-0 defeat to Everton at the KC Stadium.

Steve Bruce’s side fell behind early on as Republic of Ireland midfielder James McCarthy scored his first goal since moving to Goodison from Wigan in the summer, before Romelu Lukaku ended his loan spell at the Toffees by notching his 15th of the season.

Wicklow man and Hull defender Paul McShane made a timely comeback after a long spell on the sidelines through injury and will be hoping to make the squad for Wembley.

Rickie Lambert issued a timely reminder of his England credentials in front of Roy Hodgson with a cool finish in Southampton’s 1-1 draw with Manchester United - as Juan Mata grabbed his sixth goal in a United shirt.

They took a 3-0 advantage before half time thanks to Paulinho, an own goal from Nathan Baker and an Emmanuel Adebayor penalty as Villa fell to their 20th defeat and finished 15th.

Garry Monk’s Swansea ended Sunderland’s four-match winning streak, which included the scalps of Chelsea and Manchester United, by coming out on top 3-1 at the Stadium of Light.

Goals from Nathan Dyer and Marvin Emnes effectively ended the game after 14 minutes and though Fabio Borini got one back for the hosts, Wilfried Bony notched his 16th league goal of the season to complete the scoring.

Cardiff signed off their year in the Premier League, after their relegation was confirmed last week, with a 2-1 defeat to Chelsea.

Boyhood fan Craig Bellamy’s early strike looked to be sending them away with a great result, but Jose Mourinho’s Chelsea hit back with goals from Andre Schurrle and Fernando Torres.

Fulham also bowed out with a 2-2 draw at Crystal Palace. Dwight Gayle bagged a brace to take his recent tally to four goals in two games, with 19-year-old Cauley Woodrow equalising for the hosts in between, before Chris David ensured it ended all square late on.

West Brom brought the curtain down on their disappointing season by finishing directly above the trapdoor as Gareth McAuley’s own goal and a Charlie Adam strike made it 2-1 to Stoke at the Hawthorns, Stephane Sessegnon having equalised in between times.