Mourinho threatens to walk out of press conference 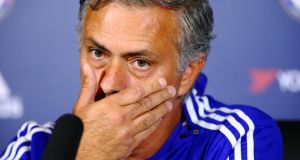 Jose Mourinho: “Don’t make me another question or I go. I go. Think twice before you ask the question. Think twice.” Photograph: Jordan Mansfield/Getty Images

Jose Mourinho threatened to walk out of Chelsea’s press conference as tempers frayed amidst intense questioning over his handling of doctor Eva Carneiro and physio Jon Fearn.

Even by the outspoken Portuguese’s standards, these have been a whirlwind few days at Stamford Bridge following an incident towards the end of last Saturday’s 2-2 draw with Swansea.

Mourinho was infuriated to see Carneiro and Fearn run onto the field to tend to Eden Hazard, telling the media after the season opener that their “impulsive and naive” decision showed they did not “understand the game”.

The Chelsea boss was condemned by a variety of medical organisations and football personalities for those comments and the subsequent development that the pair’s roles were being significantly changed.

Mourinho confirmed that they would not be on the bench at Manchester City this weekend, telling a packed media room at the club’s Cobham training that the decision did not mean they would never return.

“I don’t answer” was the stock response Mourinho gave three times after questions over the issue of medical staff entering field of play was brought up, before Chelsea’s head of media Steve Atkins interjected in a bid to calm tensions.

However, the exchanges remained terse and Mourinho’s responses curt, before he gave a lengthy, if rambling, answer on the situation.

“The first thing I said to my medical department – and I repeated it three times because I wanted to start the meeting with them having no doubts about it – was if we know, and it is easy to know by many ways, if one player has a problem, the players is more important than the result,” Mourinho said.

“If you know – if you feel, and it is easy to know when to feel because there are many examples of it – you go and you don’t think twice.”

Then things became heated. As another question on the matter was readied, an exasperated Mourinho snapped: “.”

When the reporter instead directed his question at Atkins, Mourinho got up from his chair and walked to the door saying: “Now I go, have a good weekend”.

However, Mourinho was pacified before he could leave the room and returned to his seat, where the subject turned to Sunday’s encounter with Manchester City.

Mourinho expressed surprise at the number of those in attendance who wished to talk about the issues surrounding the medical team.