Massimo Cellino resigns as president of Leeds - until April 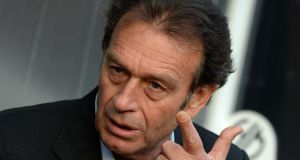 Massimo Cellino has announced his resignation as a director of Leeds following his disqualification by the Football League, but says he will return in April “in good health and good spirits”. Photograph: Tony Marshall/PA

Massimo Cellino has announced he has resigned as president of Leeds but says he will return in April.

Cellino has been disqualified as an owner and director of the club by the Football League following a tax evasion conviction in Sardinia last year.

That conviction becomes spent in April which will allow the Italian businessman to return. Cellino said in a statement:

“It is with great sadness and frustration that I have to take this step, however I abide by the Football League’s decision to temporarily disqualify me from this great football club and will return in April in good health and good spirits.

“I have done my best for a club and fans that I hold close to my heart and it is now financially much stronger than it has been for a long time. It will continue to thrive and I am sincerely looking forward to returning very soon.”

Leeds Board member Andrew Umbers will take over as Leeds chairman in the absence of Cellino, the club confirmed. Cellino added: “Following my resignation and in my temporary absence, the board has appointed Andrew Umbers to become chairman of Leeds United.

“Andrew has personally worked tirelessly with me in restructuring the football club from May 2014 and shares the same goals, strategy and insights that I do in bringing Leeds United back from its financial abyss to make it the strong entity that its fans, players and city need it to be and to which these foundations are now in place.

“Andrew is also a Yorkshireman and lifelong Leeds United fan.”

Cellino’s disqualification was confirmed on Monday following his appeal being dismissed by a Professional Conduct Committee hearing (PCC). Umbers had told the PCC in a witness statement there was “a real likelihood of insolvency” if Cellino was disqualified.

This was disputed by the Football League’s lawyer Jonathan Taylor, who said Umbers’ claims were “exaggerated, speculative and unsupported by any external evidence or, tellingly, by any evidence from Mr Cellino himself”, according to the written judgement.

Umbers previously advised Leeds on the sale of the club from Ken Bates’ ownership to the Dubai-based investment firm GFH, before Cellino took over last year.