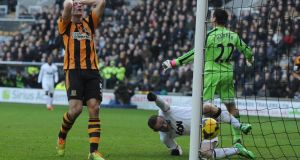 This was a slugfest that was an apt way to start the St Stephen’s day Premier League programme. James Chester goes down as the unfortunate author of a tale in which he scored twice, the second goal put past his own goalkeeper to give his former club all three points.

Unwanted bookend
The defender played only once for Manchester United – as a substitute in 2009 – but after opening proceedings for Hull, produced the unwanted bookend by heading past Steve Harper, who replaced Allan McGregor at half-time, for the 66th-minute winner.

Chester might have completed an odd hat-trick in the closing minutes when, during Hull’s late rally, he blasted a shot at David de Gea but the Manchester United goalkeeper blocked his effort.

Instead Wayne Rooney, whose exceptional volley for the equaliser made him the only the second player after Thierry Henry to score 150 Premier League goals for a single club, could talk of a title charge.

“We had poor results at the start of the season but we are fighting now. We are ready for the challenge. We might surprise a few people,” he said.

For the champions to fall two goals behind after 13 minutes had been a late Christmas present for Hull but the visitors rallied, much to the delight of their manager.

“To be two down and come back to win is a great result,” David Moyes said. “I thought it would be a long road back but these players have done this in the past and we did well to get back in the game. For us to get in at half-time 2-2 was great but when we were 3-2 Hull gave us a few scary moments.”

United’s team bus had problems reaching the stadium. “Fantastic result for us after being on the Humber Bridge for first 10 minutes,” joked the manager. “It’s not an excuse but it might be a reason for it.”

Moyes’s side, who were without Phil Jones – sidelined for a fortnight with a knee injury - struggled for a foothold during a breathless opening that featured Chester’s goal and another from David Meyler.

Weak clearance
The latter’s may be chalked off as an own-goal to Jonny Evans. His weak clearance from Meyler’s initial shot was returned to the midfielder. This time the Hull number seven was on target and Evans stuck a toe on the ball to steer beyond a wrong-footed De Gea.

Chester’s finish had also derived from questionable defending. A Tom Huddlestone corner was aimed at Alex Bruce, who climbed above the stationary Patrice Evra and the header was smashed home from the right back.

This meant United were two behind against the Premier League’s meanest home defence. Steve Bruce’s side had allowed only three all term but this was about to change.

For this Moyes could thank the blessing in disguise that resulted from Rafael Da Silva hobbling off on 18 minutes, although he seems sure to miss Saturday’s trip to Norwich City. Antonio Valencia dropped into his right back’s berth and on came Adnan Januzaj. Moyes’s introduction of the youngster to the first team has arguably been the best move of the Scot’s nascent career at the club and a minute later Januzaj once more illustrated why.

The 18-year-old sped down United’s right and drew a foul from Maynor Figueroa from which his side would pull a goal back. Rooney, out of sorts until this point, placed the free-kick perfectly on to Chris Smalling’s head and he beat McGregor to secure his first league goal of the season.

This warm-up act from Rooney was followed by a scintillating main event – when the ball came to him from a Danny Welbeck chest-down, the Liverpudlian creamed a 25-yard volley past the hapless McGregor.

‘One of my best’
“I haven’t seen it back yet but it was one of my best,” said Rooney. “It bounced kindly for me.”

At the break each manager might have asked his team to tighten their rearguard while maintaining the attacking stuff. If so, United were first to adhere when slick interplay from Rooney and Januzaj threatened to give the visitors the lead.

Hull’s response came when Danny Graham fed Yannick Sagbo, who warmed De Gea’s fingers with a 20-yard attempt that went for a corner. Here again United’s vulnerability under the high ball was evident as Huddlestone’s corner was met by Curtis Davies, but he flashed his header wide.

Huddlestone then saw an effort of his own deflected wide by Evra before Hull suffered a dose of bad luck when Bruce’s header crashed back off the bar from the ensuing corner.

Chester’s second – and unwanted – strike of the contest was about to send United home happy, though the sight of Valencia being sent off for a second yellow card after a clash with Huddlestone will not have pleased Moyes.

It left the home manager thinking what might have been. “Go home, kick the cat, have a glass of red,” was Bruce’s verdict. –
Guardian Service