Man United want full back with Young facing season out 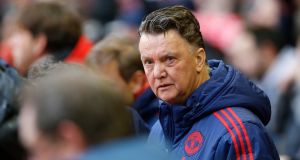 Louis van Gaal has said Manchester United are in the market for a new full back this month after revealing Ashley Young could be out for the season. Young has been playing full back for United following injuries to Antonio Valencia, Marcos Rojo and Luke Shaw but pulled up during the win against Liverpool last Sunday with what his manager described as a severe groin injury.

“He must have an operation and you can never tell how quickly the player might return after that,” Van Gaal said. “First of all you have to see if the operation is a success, then you have to make a recovery and see if there is a reaction. It is not something that can be done in a month; it might take longer than that.”

Van Gaal has promoted Cameron Borthwick-Jackson to the first team in recent weeks but feels he needs a more senior and experienced defender to slot in alongside Matteo Darmian. “I like to use young players when possible but the level of Manchester United is high and it is difficult for youngsters to deliver what we ask of them all the time,” he said.

“They are still learning and developing. It is difficult for them to achieve consistency and that is why we are looking for replacements. It is not easy to find players good enough to fit in at Manchester United though. They must be of a certain quality because I do not want to bring in players as short-term solutions. I want to sign the sort of player who will still be at Manchester United after I am gone.”

Asked whether United might have been interested in diverting Ashley Cole’s move from Italy to the United States, Van Gaal regarded the questioner with one of his most withering looks. “He has not played for a year, so that is a silly question,” he said.

Van Gaal is unwilling to discuss his personal plans for the future with the press, whom he accuses of trying to get him sacked during the club’s run of poor results around Christmas, though contrary to some reports this week he intends to see out his original three-year contract and expects to be in charge next season.

The possibility remains that Van Gaal could stay for longer, though that would depend on the level of success he could bring to the club. He was talking up United’s title chances after the victory at Anfield, yet in terms of the side’s performances on the pitch and position in the table that looks a long shot and Van Gaal is already beginning to sound more circumspect.

“Four clubs are above us and it will be difficult to get past them, but not impossible,” he said. “In various leagues you have seen this sort of thing happen before and at this stage we just have to believe we can do it. The first thing to do is start winning games and if you can keep doing that, then you can start to put pressure on others.

“You also need luck to go on a long winning run and at the moment we have seven injuries. I was hoping to have Phil Jones and Bastian Schweinsteiger back for the game against Southampton – unfortunately they will not be ready.”

At least United look a happier outfit than they did a month or so ago and by all accounts they enjoyed themselves at Anfield, with injured players mingling with the crowd, Wayne Rooney giving the half-time team talk and the rest of the side making a racket in the away dressing room after Rooney’s late goal delivered a win.

“That was good. I like it when players take responsibility on themselves,” Van Gaal said. “I have always encouraged my players to do that. As long as it is the right moment it helps the manager. What was a little bit crazy about Anfield was that I only mentioned it once in a press conference earlier in the week, then suddenly at half-time it was happening.

“I have always said Wayne Rooney is not just important as a player but as a captain and he is now encouraging other players to follow his example.” Guardian Service