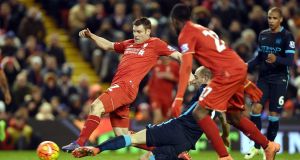 What might have been was the question on everyone’s lips at Anfield but for very different reasons. For Liverpool, it was the thought of what could have transpired in Sunday’s Capital One Cup final as Jürgen Klopp’s team exacted sweet and swift revenge on Manchester City with a second convincing Premier League win of the season. For City, it was the relief Manuel Pellegrini’s departure was not announced earlier.

A team supposedly with designs on the title was beaten convincingly at Anfield as Adam Lallana inspired Liverpool to a league double over City and, somewhere in Leicester, Claudio Ranieri had further cause to celebrate his point against West Bromwich Albion.

It is one win and three consecutive league defeats for City since Pep Guardiola was confirmed as Pellegrini’s replacement on February 1st. Their endeavour has declined markedly and they were second best in every department as Liverpool won with something to spare courtesy of goals from Lallana, James Milner and Roberto Firmino.

Pellegrini made three changes to the team that started Sunday’s final, Yaya Toure the notable absentee with a foot injury picked up at Wembley and cup hero Willy Caballero returning to the bench as Joe Hart reclaimed his place in goal.

That opened the way for Jon Flanagan to make his first league start since May 2014. He immediately made his mark, and showed a Liverpool fan’s sense for the occasion, by sending his former team-mate Raheem Sterling flying with a challenge straight from the “hard but fair” manual. Sterling was made aware of Flanagan’s presence – and of Anfield’s animosity towards him – when barged over in front of the Kop 10 minutes later.

The Premier League game carried echoes of the first half of the final with Liverpool looking to catch City cold from the kick off and goalmouth incident in short supply. Liverpool’s attacking play carried greater intent at Anfield, however, and was sustained for a longer period as Pellegrini twice clambered from his dug-out to demand a reaction from the visitors. He was to be disappointed with the response.

Jesus Navas skipped away from Nathaniel Clyne but Sergio Agüero could not reach the Spaniard’s tempting cross to the back post. As at Wembley, Sterling gave Liverpool a reminder of his weak finishing with a tame effort wide from distance and David Silva failed to find Agüero inside a crowded penalty area after a promising counter-attack.

Otherwise City were remarkably subdued for a side harbouring hopes of a title challenge. They were slow to support Agüero and the lapses in concentration that have undermined their defending all season were once again in evidence. The home side took full advantage.

Anfield had become as subdued as the City performance when Liverpool took the lead with a goal that was greeted with a second’s silence as the crowd, and Klopp, took a moment to compute what had unfolded. Milner released Lallana into space deep inside the City half and, with no defender deciding to close him down, the midfielder accepted the invitation to shoot from distance.

Lallana’s effort lacked pace but it had accuracy. It also found in Hart a goalkeeper struggling to move his feet and the ball had nestled inside the near post before Anfield eventually erupted.

Liverpool’s second shortly afterwards was immediately acclaimed for the fine team goal it was. Lallana was again involved, back-heeling Flanagan’s pass down the right inside to Firmino who opened the City defence with a first-time pass. Former City midfielder Milner was first to the ball and, before Pablo Zabaleta could intervene, Hart’s goal had been pierced in the same place for a second time.

Only now did City respond. Sterling would have had a glorious chance to convert Agüero’s cross in front of the Kop goal if Flanagan had not produced a superb challenge. The Argentina striker then had an optimistic penalty appeal for a handball by Milner dismissed and Anfield brayed with delight when Sterling failed to reappear for the second half. Contrary to Pellegrini’s insistence that good players are not inhibited by hostile atmospheres Sterling had wilted on his Anfield return.

Not that the introduction of strikers Wilfried Bony and Kelechi Iheanacho galvanised City. Their threat remained non-existent as Liverpool worked tirelessly to protect Simon Mignolet’s goal on his 100th league appearance for the club while working in packs to unnerve the visitors’ defence.

Milner, Lallana and Firmino provided close and constant support to the industrious Divock Origi and City were shredded for a third time before the hour.

Lallana was instrumental once again but Nicolas Otamendi’s role could not be ignored. The City defender gifted possession to Jordan Henderson with a woeful touch out of defence and, despite Gael Clichy’s attempt to cut out the captain’s pass, Lallana reacted quickest, rode two half-hearted challenges and released Firmino for a convincing finish beyond the furious Hart.