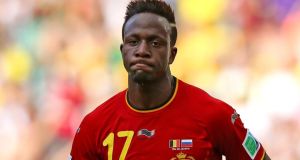 Liverpool have completed the signing of Belgium striker Divock Origi but the 19-year-old will immediately be loaned back to French club Lille for next season.

The youngster impressed at the World Cup but had been on the Reds’ radar long before that, having been tracked since he featured for his national team’s under-15 side.

Origi travelled to join up with Liverpool’s pre-season tour of America so the deal could be completed.

“I am very happy and delighted a club as big as Liverpool showed interest in me. I’m very excited,” he told liverpoolfc.com.

“I know it’s a club with a great history, great fans and a lot of great players.

“For me, Liverpool is one of the greatest clubs in the world and I’m very excited to be part of this great history.

“I am very proud to sign for the club. I’ll give everything for the club, like I did when I was small and did for Lille.

“I’m hoping we can achieve great things together.”

And while he will not be part of Brendan Rodgers’s plans for the coming campaign the striker cannot wait to be able to make an impression.

“The fact we have a young team and can grow is the most exciting part,” he added.

“With the coach we have he’s a great manager who can handle a young team.

“He’s said a lot of good things about Liverpool and told me it’s the perfect club for me.

“He was only positive and it was great to be able to talk with him about Liverpool.

“We also have experienced players. I think we can go very far – we have a lot of quality in the group.

“This year I’ll have a chance to play at European level, so in the Europa League or Champions League.

“It’s important for me to gain a place in the team, improve and be ready for the season after that.”