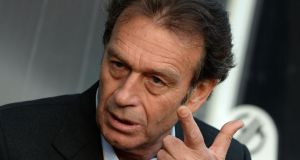 The Football League has agreed to put Leeds owner Massimo Cellino’s ban on hold until after his appeal has been heard. Photograph: Tony Marshall/PA Wire

The Football League has agreed to put Leeds owner Massimo Cellino’s ban on hold until after his appeal has been heard.

The League ruled Cellino should step down from the club’s board of directors on December 29th after disqualifying him under its ‘owners’ and directors’ test’ earlier this month. But the governing body has now reached agreement with the Italian’s legal team and he will be allowed to stay on as a club director while his appeal is being considered.

A League statement read: “The Football League and the legal representatives of Leeds United President, Massimo Cellino, have agreed the process and date of Mr. Cellino’s appeal against the decision by The Football League Board that he is subject to a disqualifying condition under its Owners’ and Directors’ Test.

“The matter will be heard by a Professional Conduct Committee (PCC) chaired by Tim Kerr QC on January 15th.

“The original decision required Mr. Cellino to resign as a director of Leeds United and cease acting as a ‘relevant person’ in line with Football League regulations by December 29th.

“The League has agreed to defer that deadline until two days after the handing down of the final decision of the PCC.

“As a consequence, the parties have agreed that if Mr Cellino is unsuccessful in his appeal, any disqualification period will be extended by an amount equivalent to the length of time between December 29th and the deferred deadline.

“The parties have agreed to make no further comment prior to the hearing of the PCC on January 15th.”

Cellino was disqualified from being owner of Leeds on December 1st when the governing body announced he had failed its ‘owners’ and directors’ test.

Cellino had successfully appealed against the League’s decision to block his takeover of Leeds in April, but after receiving further evidence from the Italian court that convicted him of tax evasion in March, the governing body ruled he was not fit to continue as the club’s president.

The League ruled the 58-year-old would be able to resume in his role at Elland Road on March 18th when his conviction is spent under UK law.

Cellino, currently in Miami, announced he was prepared to stand down on December 29th to safeguard Leeds from further sanctions. This latest development means Cellino will continue in his role of club president throughout the January transfer window, while the appeal verdict is scheduled for three weeks after his hearing.