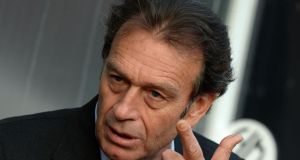 Milanic’s reign, the same as predecessor David Hockaday’s, ended almost immediately after the 2-1 loss to Wolves at Elland Road.

Neil Redfearn, who bridged the gap between Hockaday and Milanic with 10 points from 12 as caretaker, is to return as permanent manager on Monday.

Cellino asked director of football Nicola Salerno to deliver the news to Milanic shortly after he had defended his position in his post-match press conference.

“I want to apologise to the supporters, they deserve better results,” Cellino said after ending Milanic’s tenure just 32 days after he left Sturm Graz for Yorkshire.

That is a statistic to make Brian Clough’s ‘damned’ 44 days look long serving, but Cellino has never been a man to hang around.

In his 20-year spell with Italian side Cagliari he earned the nickname ‘the manager-eater’ after removing 36 managers. Since arriving at Leeds in January he has sacked Brian McDermott twice, Hockaday and now Milanic.

Cellino added to the Yorkshire Evening Post: “I have given the order to fire him. I made a mistake with this guy. He is negative, he has a losing mentality. He has three points from six games – that is relegation (form).”

The Italian unveiled Milanic – a winner of nine trophies with Slovenian side Maribor – last month, admitting, as was the case with Hockaday, that he did not know why he had appointed him.

As a taste of further chaos to come, he compared him to watermelon, saying: “He’s a very cool guy. I don’t know why (I have chosen him). Coaches are like watermelon. You find out about them when you open them. His particular qualities? He’s good looking.”

However, a failure to win any of his six games in charge and a perceived negative attitude has cost Milanic.

Redfearn is now to be given the job on a permanent basis, with the majority of Leeds fans baffled as to why the 49-year-old academy coach was not given the nod after his successful caretaker stint.

He watched the Wolves loss with Cellino and sections of the crowd sang his name as Leeds went behind to Leon Clarke’s 85th-minute winner.

Milanic’s departure was announced less than an hour after he had said he “believed” he could get it right despite his dismal start.

He did, though, acknowledge he knew why there was such a clamour for Redfearn to replace him.

Redfearn’s ascent to the top job is the achievement of a long-held ambition for the life-long Leeds fan and represents his biggest job after spells at the likes of Halifax and Scarborough.

As a player, Redfearn made over 1,000 senior appearances and has been working with Leeds’ academy since January 2009, while also taking on a number of roles with the first team.

He has been caretaker manager on four separate occasions and now has the chance to do it on a permanent basis. Cellino, known as the ‘King of Corn’ in Italy owing to his agricultural background, is likely to come under further scrutiny after his latest decision.

The 58-year-old eventually took over Leeds in April after winning an appeal against the Football League’s decision to fail him on its fit and proper person’s test in relation to a conviction for evading tax on a yacht.

He appealed the decision claiming he had not been dishonest and the full details of his appeal are still to be disclosed. A further trial for a separate allegation of tax evasion was due to be heard two days ago but was rearranged.