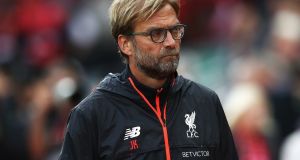 Liverpool manager Jürgen Klopp: “I spoke to Mama [Sakho] and we spoke together and that’s it.” Photograph: Julian Finney/Getty Images).

Jürgen Klopp has warned the entire Liverpool squad of the standards he expects on social media following Mamadou Sakho’s outburst on Snapchat.

Sakho tested an already strained relationship with the Liverpool manager last weekend when he vented frustration at “the lies” over his absence from matches this season. Surprisingly, the defender was handed his first appearance of the season on Wednesday in the under-23s’ Premier League International Cup game against Wolfsburg.

Klopp refused to divulge what he said to Sakho, or comment on the defender training with the under-23s rather than the first team, but admitted he addressed the issue with the whole squad.

Asked whether Sakho had to work hard and keep quiet to rescue his Liverpool career, Klopp replied: “Those two things are not a rule for Mamadou Sakho: it is a rule for every player – work hard and do your best. The rest of this I spoke to the team about and I spoke to Mama and we spoke together and that’s it. From my side everything is done and now we can carry on. There is nothing else to say.”

The manager was also reluctant to be drawn on Sam Allardyce’s embarrassing exit as England manager. “I heard about it. Everyone has been talking about it for two days,” Klopp said. “It’s a problem for me to speak about this because I don’t understand how you all jump on this. I have nothing to say. I have no experience of it. I can’t be as excited talking about it as you are – that’s all.”

Liverpool travel to Swansea City on Saturday seeking a fifth consecutive win in all competitions. Swansea, by contrast, have gone five matches without a victory and coach Francesco Guidolin is under pressure at the Liberty Stadium, although Klopp believes 17th place in the Premier League is not an accurate gauge of their performances this season.

Klopp, who could be without Divock Origi due to a minor foot injury, said: “I’ve seen nearly all of Swansea’s games this season and they are playing much better than four points looks. They are a good football side with a clear plan, different options in their style of play and have good defenders. Four points – we can’t sit back and think it will stay like this after Saturday’s game. We lost there last year. This time we want something else.” Guardian Service