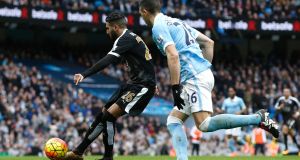 One of the things that makes football a complicated game to analyse is that so much depends on your point of view. You can’t keep up with everything that’s happening out on the field, so everyone is seeing a slightly different game. Which team are you really watching?

“A basketball coach in Croatia asked me why players in other teams always seem better than the ones you have,” Slaven Bilic said in a recent newspaper interview. “It’s because as a manager you only see things that are dangerous to your team. You feel protective.” Bilic was confirming that even the top professionals are bound by their own limited perspective.

Depending on your perspective, Leicester City being top of the Premier League could be either the greatest underdog story in football, or a withering indictment of the Premier League’s elite. Something quite similar could be said of the decisive moment of Leicester’s 3-1 win at Manchester City. The end-to-end move that led to Riyah Mahrez’s goal was 17 seconds that summed up a season.

Look at it first from Leicester’s point of view. It started in their own penalty area. Robert Huth got the first touch, intercepting David Silva’s ball into the box. Marc Albrighton and N’golo Kante chased down the second ball and hustled it away from Pablo Zabaleta. Albrighton passed to Kante, who drove forward past a tackle and released Mahrez. From there, the Algerian demonstrated that there is no better player in the league when it comes to applying freestyle playground tricks to actual top-flight football. He flicked the ball over the first challenge, beat the second man with a stepover of casual brilliance, and hammered a shot past Joe Hart. It was the perfect goal.

It didn’t look so perfect from Manchester City’s point of view. It all started with a gamble by Yaya Touré, who chased forward anticipating a return pass that never came, leaving a huge gap in City’s midfield. Silva’s speculative ball into the area missed its target. City still had a chance to win the second ball, but they left Zabaleta to fend for himself against Kante and Albrighton. He missed a tackle. Then Fernandinho missed a tackle. Then Otamendi missed a tackle. And finally Demichelis couldn’t get close enough to Mahrez to miss a tackle.

Few teams get away with missing that many tackles, especially if they don’t have the presence of mind to at least commit a foul. But those are the standards we’ve come to expect from this sleepy, sloppy Manchester City team.

One wonders what Pep Guardiola made of it all. We know now that City, led by director of football Txiki Begiristain, have been preparing the ground for his arrival since 2012. Yet the ground still seems woefully underprepared, with City looking like they need to replace most of their defence and midfield. Guardiola has never yet been in charge of a team this bad.

The victory made Leicester the favourites for the title, at least until Arsenal beat Bournemouth yesterday. There is no doubt that England has the most entertaining big league in Europe this season, and that’s largely down to Leicester, but you also have to wonder what kind of a league finds itself being led at the two-thirds point by a team that plays such basic football.

Looking at the statistics of Leicester’s campaign only emphasises the weirdness of what is going on. Statistically speaking, Leicester can’t pass. They complete only 69.3 per cent of their passes, which ranks them 20th out of 20 teams in the Premier League for pass completion, and 94th out of 98 teams in the five major European leagues.

Of course, the low rate of pass completion doesn’t reflect Leicester’s incompetence so much as their radically direct approach. They win the ball and go straight for goal at speed, and they don’t worry too much about giving it away. There is nothing wrong with this way of playing, but it’s rare to see a team of this type leading one of the big leagues. The current leaders in Spain, Germany, France and Italy all post pass-completion rates of between 85 per cent and 90 per cent.

The possession statistics likewise tell a strange story. Leicester average 43.7 per cent possession, which puts them 18th out of 20 teams in the Premier League – ahead of only Sunderland and West Brom – and 90th out of 98 in the five major leagues. The league leaders in the other major leagues all dominate possession, with figures ranging between 58 per cent and 66 per cent.

The only simple statistics in which Leicester excel are the ones that reflect off-the-ball workrate and organisation – they’re 6th out of 98 in tackles, and 8th in interceptions. These are not the sort of categories in which league-leading teams usually dominate. Bayern Munich, for instance, rank 95th for tackles and 97th for interceptions.

Conventional wisdom suggests that it’s better to have the ball than to run around chasing it. Leicester are doing their best to prove otherwise. Where Guardiola comes from, their style of play would be called anti-football. That sort of labelling has never really caught on in England, where the question people tend to ask is: does it work? To which the only possible answer is yes, though nobody is quite sure why.