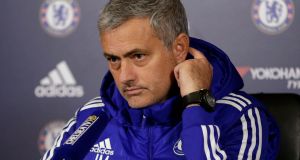 Jose Mourinho sees no reason why Diego Costa’s future is subject to speculation, but declined to say if the striker will start in Saturday’s Premier League game against Bournemouth.

Costa dropped to the substitutes’ bench for last week’s draw at Tottenham and threw his bib in Mourinho’s direction when it became apparent he would not feature at White Hart Lane.

Speculation has heightened that Chelsea are looking to recruit a new striker in January and that Costa, who has three Premier League goals this season, was nearing the end of his time at Stamford Bridge, 18 months after his £32million move from Atletico Madrid.

Mourinho said: “I don’t know why. For me no question marks. Always played, was on the bench one match, which I think is more than natural. No problems, no problems at all.

“I think he always tried to give his best, sometimes playing phenomenal, other times not so well. But he is a player that always tried.

“I didn’t ask him (his reaction to last Sunday), but he trained very well. That’s the only thing that matters to me.

“I cannot say better than ever, because normally he trains very well.”

Costa was one of three players, along with Ramires and Kenedy, pictured on a night out in the early hours of Thursday morning.

The trio were out as part of the squad’s Christmas party which had the full blessing of Mourinho.

“The paparazzi was not the best,” Mourinho said.

“I think the paparazzi had a problem with the memory card. There were 25 players inside and he only got three.”

Mourinho hopes the dinner, followed by a trip to a nightclub, has benefits for the dynamic of a squad, boosted by the availability of goalkeeper Thibaut Courtois after a three-month absence with a knee injury.

“I think they need that and many times so many circumstances it’s not easy to do it,” he added.

“They told me the dinner was really good and the after dinner was even better. Everybody was happy.”

Asked if the management team would have a night out, Mourinho added: “I’m tired of them.”

Like Costa, Mourinho has been linked with a move away from Stamford Bridge, this time with a switch to Valencia at the end of Gary Neville’s short-term deal.

“He knows I don’t want to move and I want to stay at Chelsea. There is no point. I don’t speak about Valencia.”

Mourinho declined to say if Courtois would start in place of Asmir Begovic.

“He was our goalkeeper all last season,” Mourinho added.

“We know how fundamental he was for us. It’s very important that we have him back.

“To lose your number one for three months — 19 matches without the best goalkeeper in the world — was hard for us.

“Now we are again in a super situation by having the best (goalkeeper) and a very good one.”

Asked if Courtois would start against the Cherries, Mourinho said: “Clearly sooner or later he will be my number one. If he doesn’t play against Bournemouth, he will play against Porto (next Wednesday).”

Mourinho had hoped to have captain John Terry, Ramires and Radamel Falcao available, but the trio remain out.

Nemanja Matic is fit to play with a protective mask after sustaining two broken bones in his face against Tottenham.

“He has a double fracture. It was not a nice touch in his face. But he is ready,” Mourinho said.

Asked what it meant for fellow defenders Terry, who has an ankle injury, and Branislav Ivanovic, whose deals expire at the end of the season, Mourinho said: “It means that they can sign. (But) it’s too early for them.”

Chelsea are likely to wait until later in the season to enter negotiations with the pair, who are both over 30 and therefore eligible only for one-year deals under club policy.

1 Serpentine stays on from the front to steal Epsom Derby for Aidan O’Brien
2 Monica Seles: The warrior queen who could have been the best ever
3 Eamon O’Shea: We spent quite a bit of time talking about older people rather than to them
4 Love tears them apart in stunning Epsom Oaks romp
5 Chelsea make light work of Watford to move back up to fourth
Real news has value SUBSCRIBE