Jamie Vardy’s strike salvages a point for Leicester at Arsenal 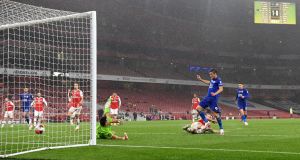 How Arsenal might rue the manner this game slipped away and how vital Jamie Vardy’s equaliser may well be for Leicester. Had Arsenal hung on to a first-half goal from Pierre-Emerick Aubameyang, which gave them a deserved lead that should have been increased, they would have been entitled to see themselves as genuine protagonists in the Champions League conversation.

They were not particularly uncomfortable until Eddie Nketiah, their substitute, was rightly dismissed in the 75th minute but Vardy threw a blanket on their ambitions by stabbing in a fine Demarai Gray cross. It means Leicester’s place among the leading pack looks that bit more secure and they will not mind overly that, despite intensive efforts to twist the knife late on, they are yet to win this particular fixture since 1973.

That statistic was the least of Brendan Rodgers’s concerns when selecting a team to do the job in 2020. Leicester were refreshed by Saturday’s comfortable win over Crystal Palace but they have largely owed their position to outstanding form before Christmas and missed two of that run’s leading architects. James Maddison was not ready to return from a hip injury while Ben Chilwell was absent with the foot complaint that forced him off against Palace; it was hardly ideal given that, under Arteta, Arsenal are a different beast to the one swatted aside in the reverse fixture in November.

It hardly seemed that way during an opening 20 minutes when the misty rain seemed to cloud the home side’s heads. They had only just begun to offer a threat when Aubameyang struck. The goal came via one of the counterattacks that had already formed the basis of Arsenal’s forays, the difference being this one was beautifully executed.

The on-loan Dani Ceballos, who has played himself into contention for a longer stay in recent weeks, sent Bukayo Saka away on the right with a perfectly weighted pass that the lunging Caglar Soyuncu could not intercept. Saka, such a tricky and clear-thinking customer, would have fancied himself one-on-one with Jonny Evans but his task was made easier when the centre-back stumbled. It meant half of the penalty area was at his disposal and he made good use of the space, laying on the simplest of finishes for Aubameyang.

Arteta’s reaction suggested he knew the potential importance, both in the wider and more immediate schemes.

Leicester had zipped the ball about early on and came close before the quarter-hour when Kelechi Iheanacho, teed up by Marc Albrighton, drew a sharp stop from Emiliano Martínez. The keeper did well to repel the low drive, fizzed through a crowd, with his feet and at that point the visitors looked a convincing facsimile of their all-conquering autumn selves.

But Saka and Aubameyang shifted the tone and by half-time Arsenal could have made the game safe. Saka was at the heart of everything and after being played in by Alexandre Lacazette he forced Kasper Schmeichel to repel from an angle.

Muddled defending then presented him with another opening, which he opted to send Lacazette’s way. The striker’s shot on the turn forced an excellent one-handed save from Schmeichel, who had barely got back up before he was required to tip over Héctor Bellerín’s cross-shot.

Lacazette, justifying his recall to the starting lineup with intelligent movement and link play, should finally have doubled the lead but, offered a free header by Bellerín’s perfect delivery, planted it straight at a grateful Schmeichel.

He could have regretted it a minute after the restart when Vardy centred from the left and James Justin’s close-range effort hit an unwitting David Luiz.

At the other end, Lacazette was still making the slippery ball stick and, after outfoxing Evans, he won a free-kick that offered David Luiz a chance to put laces through it. The shot, from 25 yards, was well struck and slightly deflected, obliging Schmeichel to replicate his first-half form with a sprawling parry around his left post.

When Vardy, now appearing on the right, clipped over a cross for the unmarked Iheanacho it took exceptional work from Martínez to keep hold of the resulting volley.

“Open your eyes my friend,” Granit Xhaka bellowed at the fourth official, perceiving an injustice in the buildup, but to most present this was already a compelling watch.

Arsenal were increasingly being pegged back, Vardy failing to make clean enough contact with a header and a shot.

Lacazette’s potential clincher was ruled out for offside but the pressure increased after Nketiah, his 71st-minute replacement, launched a thigh-high tackle on Justin, but Arsenal looked like holding out before Vardy made his most decisive connection of the night. – Guardian