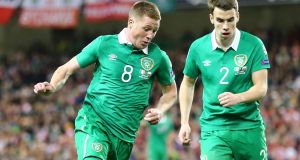 Everton have been given a major boost ahead of next week’s crucial Capital One Cup semi-final second leg at Manchester City with news that Republic of Ireland duo James McCarthy and Seamus Coleman are likely to be fit.

McCarthy has played just once in the last eight weeks because of a groin problem while Coleman was injured in the first leg on January 6th and was expected to be out for three to four weeks.

“James McCarthy and Seamus Coleman are both progressing really well and I expect those two to be back in the squad after this full week,” said manager Roberto Martinez.

Neither are likely to be risked for Sunday’s visit of Swansea but utility man Bryan Oviedo will be ready after being carried off in the weekend’s dramatic 3-3 draw at Chelsea having taken a blow to the same leg he sustained a double fracture on two years ago.

Midfielder Tom Cleverley is also set for an outing against the Swans after being an unused substitute at Stamford Bridge.

“There was good news on Bryan Oviedo. We all felt the worst when he left the pitch on a stretcher but it’s been good to see him running in training today and I don’t expect him to be missing from the squad at the weekend,” the Toffees boss told evertonfc.com.

“Tom Cleverley made the bench against Chelsea, so from that point of view he was passed fit, and it’s just about making sure he gets the match fitness that he needs and I expect this week is going to be a long week and a very good week of work to prepare for a very busy period ahead.”

Martinez could have Leeds defender Sam Byram on board by the weekend as personal negotiations continue after they had a bid accepted on Thursday but they may have to fend off West Ham, who have reportedly also been successful with their offer.

But forward Steven Naismith is on his way out after travelling to Norwich for a medical ahead of an €11 million move.

The Canaries wanted to sign the Scotland international in August but their bid came in too late for Everton to sign a replacement and so the situation was put on hold until this month.