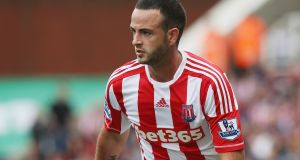 Republic of Ireland international Marc Wilson says he is “delighted” to have completed his switch from Stoke City to Bournemouth after the 28-year-old signed what is believed to be a two-year deal with the club where he spent two spells on loan back in 2007.

“I am delighted to be back on the south coast,” the defender told the club’s website.

“I enjoyed my years at Stoke but I spoke with the manager Mark Hughes and we both agreed it was time to move on. I am excited now to start a new chapter in my career.”

The Irishman played more than 150 times for Stoke but lost his place last season before eventually being completely sidelined by injury. It was unclear whether he might force his way back into Hughes’s plans but his fate appears to have been sealed when he criticised the lack of defensive work being done in the squad’s training sessions on social media recently, although the manager subsequently insisted that the decision to let him leave had already been made.

Bournemouth have reportedly paid around €2.3 million for Wilson with the potential for the deal to double in value depending on how the move works out.

“Personally,” he says, “I just want to get my head down, train hard with the boys and hopefully, if I get the chance to play, do the best I can for the club.”

His former stoke team-mate Glenn Whelan, meanwhile, has admitted that the arrival of Joe Allen has increased competition for places in the club’s midfield.

The Dubliner started against Middlesbrough on Saturday with the former Liverpool player coming in alongside him during the second half.

And Whelan insists that he welcomes the added pressure that his arrival brings.

“We want to keep improving and the only way to do that is by bringing in better players,” he says. Me and Giannelli (Imbula) started the game at the weekend, but Joe is pushing us very hard and we know if our performances drop off then he will come in straight away, so he’s certainly keeping us on our toes.”