Ipswich Town hang on to earn replay against Southampton 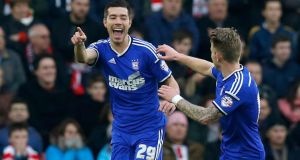 If matches were decided on the basis of possession and territorial dominance alone, then Southampton would already be in the fourth round of the FA Cup. Ronald Koeman’s side spent almost the entirety of the second period in Ipswich Town’s half as they searched for a winning goal and it was possible to count on one hand the number of times Mick McCarthy’s men crossed the halfway line.

Ipswich, however, would not budge and left every last drop of sweat on the pitch at St Mary’s as they battled to keep their Premier League opponents at bay. There will be plenty of sore limbs and aching muscles among McCarthy’s squad in the next few days, but it was worth it. Ipswich deserved their 1-1 draw and Southampton will not relish the prospect of a replay at Portman Road next Wednesday. They knew they had been in a game.

The sight of blue and white beachballs and inflatable bananas flying around the away end before kick-off might have suggested that Ipswich travelled south in party mode, as did McCarthy’s decision to make six changes to the side that beat Charlton Athletic 3-0 last Tuesday, but appearances can be deceiving. Ipswich, given tremendous backing from their supporters, are second in the Championship for a reason and it was obvious that while they could not match Southampton’s quality, they could not be accused of a lack of effort or heart.

Ipswich are built in the classic McCarthy tradition, awkward, diligent and organised, and Southampton, unnerved by the way they were hassled into making cheap errors in the early stages, hardly resembled the side that took Arsenal apart with such precision on New Year’s Day. As pass after pass went astray in the opening 20 minutes, anyone watching Southampton for the first time would have taken a lot of convincing that they are fourth in the Premier League.

Stephen Hunt had already threatened by the time Darren Ambrose, a player who has never quite lived up to the promise of his youth, headed Ipswich into the lead after 19 minutes. James Ward-Prowse was something of a makeshift right-back for Southampton and his unfamiliarity with the position was exposed when Tyrone Mings, reportedly a target for Arsenal and Chelsea, found space on the left and hung a deep cross to the far post. The ball was in the air for an age and Ambrose had a lot to do but the 30-year-old, who returned to Ipswich in September after 11 years away, managed to generate enough power on his header to send it looping high to Forster’s left and into the top corner.

The jolt of going behind stirred Southampton into life and Dean Gerken made an excellent save with his legs to deny Steven Davis, but the frustration for Ipswich was that all their good work was undone by the moment of indecision in their defence that culminated in Morgan Schneiderlin’s equaliser 12 minutes before half-time. Ward-Prowse hung a diagonal cross towards Graziano Pellè and once Ipswich had failed to deal with the Italian’s knock-down, it was a simple task for Schneiderlin to lob Gerken from close range.

It was a desperately poor goal to concede and it subsequently became a struggle for Ipswich to escape their half as Southampton asserted their authority and pressed for a second goal. Gerken had to be alert to push Ward-Prowse’s free-kick away, Pellè had a shot at the near post deflected wide and Ryan Bertrand was squeezed out by some last-ditch and quite possible illegal jockeying just when he looked poised to beat the goalkeeper.

Ipswich started the match in an adventurous 4-4-2 formation but Southampton’s total dominance in the second half forced McCarthy to sacrifice his side’s attacking intent and protect what he had, Daryl Murphy moving to the right of midfield and leaving David McGoldrick on his own up front.

McGoldrick, a graduate of Southampton’s academy, barely had a chance to remind the locals of his qualities, yet this was a team effort. Southampton ran out of ideas and, ultimately, there were not too many moments when hearts were in Ipswich mouths as the minutes ticked away.