Two from Christian Eriksen had dragged Southampton back after fast start 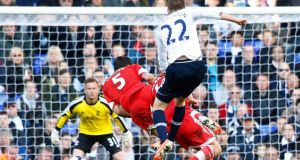 Tottenham 3 Southampton 2: Gylfi Sigurdsson fired in a long-range goal in stoppage time as Tottenham Hotspur completed a comeback from 2-0 down to win 3-2 at White Hart Lane.

Jay Rodriguez and Adam Lallana had taken advantage of defensive mistakes to give Southampton a seemingly comfortable lead before Christian Eriksen scored twice for the hosts. A draw looked likely until Sigurdsson rifled a low 25-yard shot into the net, giving Tim Sherwood a repeat of the 3-2 victory that he enjoyed in his first match as a Premier League manager at St Mary’s in December.

With neither side having a realistic chance of climbing much farther up the league table, it could have been argued than this was a game that held more significance for certain individuals than for the teams.

Several Southampton players, in particular, were seeking to enhance their World Cup credentials, while for Sherwood it was another opportunity to put forward the case for allowing him to remain in charge of Tottenham beyond the summer.

Since his maiden win at St Mary’s Spurs’ performances had wavered between encouraging and wayward – as their display did in this game – reports continue to link Tottenham with several more experienced managers, including Mauricio Pochettino, who has won many admirers with his astute playing of the hand he was dealt at Southampton.

The pleasure of watching the Saints on a good day lies in the way a slick ensemble enables individuals to flourish. This is a true team and their early fluency contrasted to the well-intentioned but spluttering moves of Tottenham.

Adam Lallana charged down an attempted clearance by Younès Kaboul in the opening minute and that was a precursor of much of what was to follow in the first period, even if Kaboul had the first scoring chance a minute later when his downward header from an Eriksen corner brought a comfortable save from Artur Boruc.

Tottenham were too often guilty of haphazard passing in the first half and the visitors were happy to take advantage. A wayward ball from Aaron Lennon in the sixth minute enabled Rickie Lambert to lumber towards the Tottenham penalty area but the striker elected not to go for a goal and instead teed up Lallana, who fired high and wide from 18 yards.

Tottenham missed Emmanuel Adebayor’s aerial power up front but Roberto Soldado was endearing himself to the White Hart Lane faithful by serving as a clever fulcrum when the ball was played to his feet. In the 14th minute the Spaniard produced a lovely flick to send Nacer Chadli racing free down the left. As Soldado darted into the middle in anticipation of a return ball that would have presented him with a tap-in, Chadli pulled the cross behind him, offering, instead, further evidence of a team that were not quite clicking.

The error that led to Southampton’s opening goal could hardly be attributed to sloppy team-work – it was just a basic blunder by Kyle Naughton, who misjudged a long kick by Boruc, allowing the ball to bounce over him and into the path of Jay Rodriguez. The striker curled a lovely low shot beyond Hugo Lloris and into the far corner.

Lallana then had a shot blocked after another neat setup by Lambert. Luke Shaw joined in the attacking, too, one long drive by the left back deflecting inches wide.

Southampton were looking likely to increase their lead even without the help of the hosts but, in the 27th minute, another mistake by Naughton aggravated Spurs’ problems. A loose ball by the right back fell to Lambert, who fed Lallana yet again and this time he finished emphatically from 14 yards.

An enraged Sherwood abandoned his seat in the stands and stormed down to the sidelines to vent his spleen. Naughton may have taken some of the sting out of the tongue-lashing he was likely to get at half-time by helping Spurs to cut the deficit immediately. The full back crossed from the right and this time it was a Southampton defender who goofed, Nathaniel Clyne botching the clearance and allowing the ball to run to Eriksen, who rammed it into the net from close range.

Sherwood, you suspect, still gave full voice to his anger during the break. Pochettino was presumably agitated, too, given the way his side seemed to let the initiative slip, and the Argentinian replaced Clyne with Calum Chambers during the break. So he must have been aghast in the 47th minute when feeble defending enabled Spurs to equalise. Soldado outmuscled Dejan Lovren as the Croat tried to let the ball run out of play near the corner flag and the striker’s low cross was allowed to run across the face of goal to Eriksen, who gratefully tucked away his second goal.

Now confidence coursed through Tottenham and their play flowed more smoothly. As the home team took a grip of central midfield, where Sigurdsson was introduced for Mousa Dembélé, Chadli and Eriksen both blasted efforts into the side-netting after swift attacks. Eriksen then fired wastefully over when through on goal in the 69th minute.

Soldado craved a goal to crown his impressive performance but was denied a chance to claim one in the 75th minute when Eriksen overhit a pass from the left. Both sides chased a winner and Lambert came close to finding one for the Southampton, flashing a fierce low shot just wide from 16 yards in the 88th minute.

As time ticked towards a draw, Sigurdsson pounced on a loose ball and whacked it into the net to the delight of the home crowd and, no doubt, Sherwood.