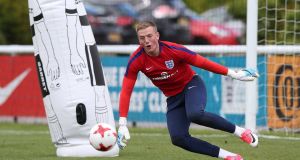 Everton are in advanced talks with Sunderland over a deal for Jordan Pickford and willing to meet the £30m asking price to land the England Under-21 goalkeeper.

The Goodison Park club registered their interest in the 23-year-old shortly after Sunderland were relegated from the Premier League but their initial valuation was rejected. Negotiations have continued, however, and Everton have agreed in principle to meet Sunderland’s demands for £30m. The structure of the deal, involving the size of the initial payment and add-ons, has still to be finalised.

Pickford has postponed a decision on his future until after the European Under-21s Championship in Poland. The boyhood Sunderland fan, one of the few positives from the club’s dismal relegation season under David Moyes, travelled to Poland with Aidy Boothroyd’s squad on Monday and will face Sweden in England’s opener on Friday.

He said last week: “I have spoken to my agent and told him that I just want to concentrate on the Euros and be the best I can be. I’ll see where it takes me. Being a Sunderland lad it’s a bit hard to take and it’ll always be hard to take.”

Arsenal have also been linked with Sunderland’s young player of the year but, providing personal terms are agreed with Pickford and a medical passed after the Euros, Everton are set to secure his services for a record fee for a British goalkeeper. Ronald Koeman is determined to improve Everton’s last line of defence next season after unconvincing displays from both Joel Robles and Maarten Stekelenburg last season. Robles will shortly enter the final 12 months of his contract at Goodison and may look to leave this summer should his first-team prospects recede.

Pickford could be joined at Everton by several other expensive recruits this summer with the club, guided by director of football Steve Walsh, also keen on Ajax captain Davy Klaassen, who is likely to cost around £25m, Swansea City’s Gylfi Sigurdsson and Burnley defender Michael Keane.

Everton are also in talks with the Malaga striker Sandro Ramírez, who has a €6m release clause in his contract, and hope to agree terms with the Atlético Madrid target this week.