Eriksen and Tottenham brush aside Sunderland

A brace from the Dane, along with goals from Kane and Dembele gave Spurs the win 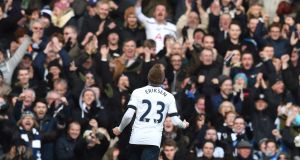 A Christian Eriksen brace saw Tottenham come from behind to beat struggling Sunderland and reaffirm their own top-four Premier League ambitions.

Sam Allardyce’s side headed to White Hart Lane on the back of a morale-boosting win at Swansea on Wednesday and took the lead through Patrick van Aanholt’s second goal in a week.

But Eriksen levelled just 91 seconds later before Mousa Dembele put Spurs ahead after the break, with Eriksen’s second and a Harry Kane penalty — the first deflected off Sunderland debutant Jan Kirchhoff, who then conceded the spot-kick - wrapping up a 4-1 victory for Mauricio Pochettino’s side.

Spurs had lost here to a late Leicester goal in midweek but recovered after falling behind as their quest for Champions League football continued.

Kane came close in the opening stages but his low effort was tipped behind by Premier League debutant Jordan Pickford in the Sunderland goal.

Dele Alli then blazed wildly over from inside the box as Danny Rose’s shot deflected to the England midfielder but Allardyce’s men were almost architects of their own demise 10 minutes before the break.

Jeremain Lens was robbed by Dembele on the edge of the Spurs box, with the Belgium international breaking at pace across the halfway line.

With several options he picked out Erik Lamela, whose subsequent shot across goal flew wide of the target as Sunderland’s defence laboured to get back in time.

But it was the visitors who took the lead before the break as Adam Johnson’s neat pass took out the back-tracking Alli and allowed Van Aanholt to finish coolly past Hugo Lloris from close range.

Spurs reacted immediately from the restart as Kane broke through and saw his shot saved by Pickford, only for Eriksen to finish from the rebound as Lee Cattermole somehow failed to clear a tame strike.

The game had certainly come to life and Jermain Defoe tested Lloris with a low shot from a free-kick on the edge of the box after Lens had been felled.

The former Tottenham favourite then came close after the restart as an attempt at a clever set-piece routine from Spurs ended in Sunderland breaking clear, with Defoe firing into the side-netting having been released by Adam Johnson.

Alli headed Lamela’s tempting cross wide as both sides started to find more openings in the early stages of the second half, with Pickford again a match for Kane as he struck from outside the box.

The England Under-21 international made his Sunderland bow at Arsenal in the FA Cup last week and was showing here why Allardyce is willing to put faith in him.

He pushed away a Rose shot on the hour mark but could do nothing as Dembele’s low strike flashed past him from the rebound.

And he was again helpless as Eriksen grabbed his second of the game seven minutes later, the Dane’s long-range effort taking a huge deflection off Kirchhoff — who had only just come off the bench to make his Sunderland debut.

Kane’s frustrating afternoon continued as Pickford pushed away yet another effort but he finally got his goal after Kirchhoff’s debut to forget continued as he tripped Rose in the penalty area, with the England striker thrashing home the resulting penalty.