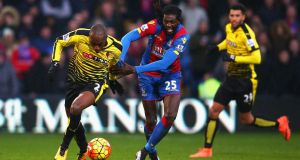 Emmanuel Adebayor has made a solid start to his time at Crystal Palace after joining from Tottenham during the January transfer window. Photograph: Getty.

Emmanuel Adebayor is fired up by the prospect of scoring and celebrating against Tottenham Hotspur in the FA Cup on Sunday, as he took a swipe at the club’s chairman, Daniel Levy, for making “everything complicated” for him at White Hart Lane.

The striker, who joined Crystal Palace last month and is preparing for their visit to White Hart Lane, fell out with Levy towards the end of his time at the club. Having lost his place in Mauricio Pochettino’s team, Adebayor wanted a loan move to West Ham United in January last year only to see Levy block it at the last moment.

Then, in the summer, when Adebayor was again linked to West Ham, he demanded that Levy pay up the final year on his contract – a sum of £5 million (€6.45m) – to allow him to join them as a free agent. Levy refused.

They finally reached a settlement to cancel his contract on September 13th, meaning that Adebayor would have to wait until the January transfer window to join a new club. He has signed a deal at Palace, initially until the end of the season, and they are paying him £65,000 a week. Tottenham, as per the severance agreement, are contributing £35,000 a week to top up Adebayor’s wage to the £100,000 he was due to get from them until the summer.

“With the club itself, it wasn’t a good relationship with the chairman, Daniel Levy, as he made everything complicated,” Adebayor said.

Now Adebayor is determined to shine on Sunday and build on what has been a solid start at Palace.