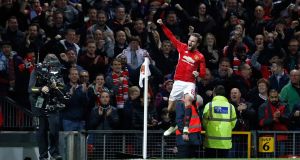 Manchester United’s week took a much needed turn for the better as a Juan Mata goal propelled them into the last eight of the League Cup at the expense of their neighbours. Whether José Mourinho wants an extended run in this competition is another matter, but at least he and his team have shifted some of the pressure onto their rivals across town.

Doubtless Pep Guardiola is not greatly enamoured of the lesser of the domestic trophies either, though he could have done with a win here. This was City’s sixth game in a row without a win, uncharted territory for their new manager. In truth the side Guardiola selected did not suggest an intention to win at all costs, and if he did not have an inkling before the manager must now be fully aware that without David Silva and Kevin De Bruyne City tend to be short of snap and polish.

Both sides made changes from their weekend line-ups, though City made the most. Sergio Agüero was named on the bench, John Stones left out and young prospects Aleix García and Pablo Maffeo given rare chances, the latter making his first team debut. Considering Marcos Rojo came in as a replacement for the injured Eric Bailly the United team was closer to full strength, with Chris Smalling left out and Michael Carrick preferred to Marouane Fellaini. Mourinho apologised in the match programme for the performance at Chelsea, and though he has previously admitted the EFL Cup has to be the lowest of his priorities, with this derby coming so quickly after the Stamford Bridge debacle he was aware of the need to field a side capable of obtaining a more acceptable Manchester United result.

United went behind in the first minute at Chelsea and survived a second minute scare here. Jesús Navas crossed from the right and found Kelechi Iheanacho in front of goal, but the striker could not adjust his body position in time and his close range header flew over. The home side’s three-man midfield allowed Paul Pogba a freer role than has generally been the case this season and the France player’s mobility showed up well in the opening stages, though City moved the ball around better with their short-passing game and García was involved in several early attacks. For all that it was a fairly low wattage, error-ridden derby in the first half, short on quality and anything resembling goalmouth incident. Vincent Kompany seemed to sum up the paucity of proceedings when he hoofed the ball into touch like a rugby player when under no pressure in his own half, an odd sight quickly followed by the normally reliable Juan Mata doing almost exactly the same thing.

For most of the evening the City support, though outnumbered, had been making much more noise than their hosts, though a couple of interventions by Zlatan Ibrahimovic just before the interval finally brought the home crowd into voice. Poised to attempt the game’s first shot on target the Swede was foiled in the act of shooting by a timely block from Nicolás Otamendi, then when Ibrahimovic released Marcus Rashford down the left the teenager was only stopped by and even better tackle from Maffeo. Promising as those moments were for the home side, United could still have turned round behind had Iheanacho made more of a clear run at goal five minutes from the break. The striker had a clear sight of goal on the left but held on to the ball too long in an attempt to improve his shooting angle and was dispossessed by Rojo coming across to cover from the opposite flank.

Not entirely unexpectedly in front of the watching Belgium manager, Roberto Martínez, Kompany failed to appear for the second half, which began with Iheanacho wasting a good position by passing to an offside Nolito instead of spotting a better timed run from Leroy Sané. Actual excitement finally arrived a couple of minutes later, with Ibrahimovic effortlessly giving Otamendi the slip to set up Pogba, who looked certain to score only for the faintest brush of Willy Caballero’s gloves to touch his shot onto a post.

United were not to be denied, however, and took the lead on their next attack when the outstanding Ibrahimovic rolled a low cross into the City area towards Ander Herrera. Mike Dean could easily have awarded a penalty as the midfielder was unceremoniously bundled off the ball by Fernando, and might have done so but for the ball running free for Mata to find Caballero’s bottom corner. United had upped their tempo noticeably since the interval and deserved to go in front, the City fans contented themselves with a plea for Agüero to be sent on. They got Raheem Sterling instead. Making the most of City’s disruption at the back United could have gone further in front when Rashford crossed from the left for Ibrahimovic; uncharacteristically the striker failed to make any sort of contact.

Guardiola did send Agüero on after that, to little effect. There was nothing coming through from midfield and United continued to press forward with conviction. They could have wrapped up the result before the end but Rashford, having an off-night by his standards, put in a poor cross from another Ibrahimovic invitation with Pogba unmarked in the middle.