Darron Gibson ruled out until next season despite injury progress 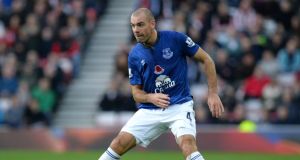 Everton manager Roberto Martinez says that he is happy with Darron Gibson’s progress as he continues his recovery from injury, but the Irish midfielder will not play again this season.

The 25-time capped international has been out of action with a broken metatarsal since Everton’s 2-1 league win over QPR on March 22nd.

The club’s Spanish manager has had to contend with a number of injuries this season, including defenders Tony Hibbert and Bryan Oviedo as well as South African winger Steven Piennar.

“Bryan Oviedo has had a very good first few days of treatment and we’re hoping he’ll be fine for the start of August.”

The Everton boss says he would also prefer to hold back Pienaar for pre-season, rather than risk him in their remaining three matches.

The South African has made just one appearance — as a 28th-minute substitute against Swansea on April 11 — since mid-December because of injury.

With Everton having little to play for in their final three games, Martinez would rather the 33-year-old concentrated on getting himself ready for next season.

“Stevie is working really hard now to be involved before the season ends but it will be difficult to find out one way or the other,” he told evertontv.

“We’ll monitor his situation and if he’s 100 per cent over the next three weeks it will be great to see him on a football pitch.

“If not, we’ll make sure he has a good fresh start in pre-season and make sure he’s in the best possible shape to have a good campaign.

“It’s a period now where we want Stevie to be fit before the end of the season but, in one way or another, he has to be starting pre-season 100 per cent.”