Claudio Ranieri wants to be ‘most crazy man’ of Premier League

Leicester would be in middle of table if big teams ‘switched on the turbo’, says manager 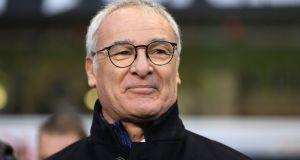 Leicester City manager Claudio Ranieri: “It is a crazy league because if it was a normal league Leicester would not be at the top. The other bigger teams would be there.” Photograph: Nigel French/PA Wire

Leicester City manager Claudio Ranieri says he wants to be the “crazy man” who frightens the Premier League elite.

Ranieri’s side have shocked everyone this season, transforming themselves from relegation strugglers 12 months ago to title contenders under the Italian. They are level on points with the league leaders Arsenal, seven points ahead of fifth-placed Manchester United, and the former Chelsea manager is revelling in Leicester’s role as the gatecrasher.

“Now it is a crazy league and we want to frighten this crazy league,” said Ranieri, whose team host Tottenham to night.

“I want to be the most crazy man and team in the Premier League. It is a crazy league because if it was a normal league Leicester would not be at the top. The other bigger teams would be there.

“But there is an opportunity for us because the big teams don’t start yet. If they start then Leicester will fight but we would be in the middle [of the table]. The big teams haven’t switched on the turbo yet – and we hope they don’t switch on turbo.”

Despite the seven-point cushion for Champions League qualification and the nine-point gap to the final European qualification place in the table, Ranieri still remains guarded about the possibility.

Matty James may make his long-awaited return to the Leicester squad against Tottenham in the Cup. The midfielder has been out for eight months with a serious knee injury but could be on the bench after playing half an hour for the development squad on Monday.

“He could come with me on the bench in the next match,” said Ranieri. “For me Matty is very important. I watched a lot of matches from last season and he played very well with [Esteban] Cambiasso in the middle. He is young, he is strong, with a good personality, good skill, good vision. This is another very good player for me who can help the squad.”

However, Jeff Schlupp’s hamstring injury is worse than first realised and he will still be missing until the end of February.

Ranieri is again expected to make changes to his team for the visit of Spurs with the likes of Ben Chilwell, Marcin Wasilewski, Ritchie De Laet, Andy King, Leonardo Ulloa and Demarai Gray, set to make his home debut, all in the frame for recalls.

Tottenham manager Mauricio Pochettino is also expected to make several changes from the side that lost 1-0 to Leicester in the Premier League last week but he insisted that does not mean they are not interested in a Cup run.

“We have ahead of lot of games. Always we assess the players and maybe we take a decision to rest some players for tomorrow. It’s a clear message for our fans – when you are Tottenham or Leicester we need to show respect for the squad.”