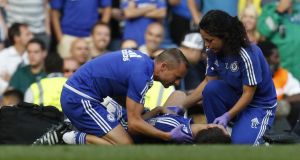 Two days since the revelation that Chelsea have demoted their first-team doctor, Eva Carneiro, after Jose Mourinho deemed inconvenient her tending to the injured Eden Hazard in the closing minutes of Saturday’s 2-2 draw with Swansea City, the club remain silent and their position still staggering.

If there are factors other than the treatment of Hazard that influenced Mourinho’s reaction, Chelsea are not explaining them; the club are not commenting on the downgrading of Carneiro’s role and that of the physiotherapist, Jon Fearn, beyond saying it is an “internal staff issue”.

That silence is not expected to end with enlightenment from Mourinho when he is probed on Friday at the press conference previewing Sunday’s match against Manchester City – but once the special one has the microphone, who knows, he may explain.

For now, in the vacuum of any more rounded view offered by the club, this looks to be a rash act of dictatorial temper by Mourinho, sanctioned by the owner Roman Abramovich and his executives, straightforwardly, breathtakingly, contrary to all sense and reason.

Until Wednesday, few people outside its 20 members were aware there was such an organisation as the Premier League Doctors Association, which is thought never to have made a public statement in 19 years of existence. The absolute vehemence of their first one, accusing Chelsea of “unjust in the extreme” treatment of Carneiro, presumably a member, demonstrated in itself how clearcut the wrong appears.

Those doctors, and the Football Medical Association, which issued its own statement supporting the actions of Carneiro and Fearn in running on to treat Hazard, seemed to be shaking their collective heads that such basic principles need stating at all.

Mourinho, consumed by the football bubble of points and matches and the need to do better than draw with Swansea in the first home Premier League game of the season, may have been right that Hazard did not look badly injured, but he has to know he was not in any position to decide, and should not have suggested it.

His howl of fury as Carneiro and Fearn ran on to the pitch could be excused as a heat-of-the-moment outburst as – just – could his grumbling afterwards that he was disappointed with his medical staff because it left Chelsea with nine men on the pitch, goalkeeper Thibaut Courtois having been sent off. But to follow that with an actual, corporate demotion of the doctor and physiotherapist, banishing them from their first-team matchday duties, has sent a dreadful signal. It suggests doctors should compromise their overriding duty to players’ health and safety, and instead take long-distance punts on the seriousness of injuries, taking into account the state of play in the match.

So first principles that should be completely accepted have had to be spelled out. The General Medical Council has pointed to its foremost guidance to doctors that they must: “Make the care of your patient your first concern”. That, and the duty to “take prompt action if you think that patient safety, dignity or comfort is being compromised” are, experts have said, principles that override an employer’s complaints of inconvenience, even one with a football match to win.

Hence the Premier League Doctors Association stating so categorically that Carneiro “adhered to her code of professional conduct and did her job properly” when running on to treat Hazard, particularly having being summoned by the referee, Michael Oliver. The statement complained woundingly that Chelsea have set a precedent “that the medical care of players appears to be secondary to the result of the game”.

The FMA’s chief executive, Eamonn Salmon, formerly the physiotherapist at Manchester City, also reiterated that medical staff have a duty to treat injured players, which goes beyond “extraneous factors” such as the match itself.

Bizarre as it seems that such rebukes need to be made to one of England’s topmost clubs and most high-achieving managers, Chelsea’s treatment of Carneiro and Fearn is only the most extreme form of a natural tension that can exist between medical staff and sporting imperatives. Managers, effectively the medical staff’s bosses, want their players to be fit, as soon as possible, and doctors must resist feeling any pressure which could compromise their judgment.

It is not clear where the Carneiro and Fearn humiliations will end up, with employment lawyers suggesting they may have a case to sue for constructive dismissal, on the grounds that Chelsea have fundamentally breached the employer’s duty of trust and confidence. Yet perhaps it is already valuable that this shock has caused these fundamental principles to be restated.

The point does not need to be made heavy-handedly that football has suffered fatal tragedies in its history, not just player injuries, and that also sets the context for the pre-eminence of medical attention over the business of winning matches. Bill Shankly did, really, mean it as a quip when he said football is more important than life and death. It is not, and all the great man’s successors, however irritable, need never to forget that.