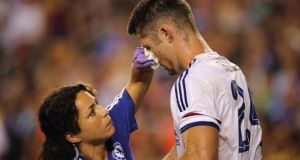 The role of Chelsea first-team doctor Eva Carneiro is to change significantly after medical staff were criticised by manager Jose Mourinho following his side’s 2-2 draw with Swansea at Stamford Bridge. Photograph: Getty

Eva Carneiro’s role as Chelsea first-team doctor is understood to be changing significantly, raising questions about her Stamford Bridge future.

As Saturday’s Premier League season opener against Swansea came to a close, manager Jose Mourinho became animated as Eden Hazard had to leave the field.

That move left Chelsea with nine men temporarily and saw Mourinho publicly call his medical staff “impulsive and naive” after the 2-2 draw, saying they all need to “understand the game”.

First-team doctor Carneiro took to Facebook to thank the “general public for their overwhelming support” in the wake of the comments which have been followed by a backroom rejig.

Carneiro will remain as the club’s first-team doctor, but her role will change significantly and revolve around the Cobham training base.

Most significantly, it is believed she will not now be involved in Chelsea matches and training sessions, raising questions over her long-term future.

A Chelsea club spokesman said on the matter: “We do not comment on internal staffing matters”.

Carneiro joined Chelsea in February 2009, having previously worked at the British Olympic Medical Institute and with England Women’s Football and UK Athletics.