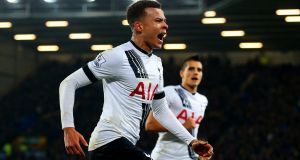 For 45 minutes at Goodison Park, Tottenham Hotspur showed why talk of Champions League qualification, and perhaps even a title challenge, should not be beyond Mauricio Pochettino’s team this season. By the end, it was clear they still have some way to go before realising the more ambitious claims that Glenn Hoddle and others have bestowed upon them.

Spurs had to settle for a point at Everton and one that Roberto Martínez’s team thoroughly deserved, after a second-half transformation that left Hugo Lloris the busier goalkeeper, when the France international had been virtually unemployed before the break. Aaron Lennon, the former Spurs winger, and Dele Alli illuminated an entertaining game with fine first half goals but the visitors’ enterprise and command faded after the interval in the face of a belligerent Everton response.

Pochettino’s team were dominant from the first whistle to the moment Lennon put Everton ahead from their first attack. Intense pressing and accuracy in possession left the home side encamped in their own half and brought simmering frustrations over Everton’s run of one win in six league games to the surface at Goodison Park. There were ironic cheers from the Gwladys Street when Tim Howard collected a routine cross for the second home match in succession. As in the 4-3 loss to Stoke City on Monday, the USA international reacted to the self-defeating noises from his own supporters. The deteriorating relationship helps no one and is hardly conducive to Everton’s required improvement.

The control, one-touch passing in the final third and defensive composure displayed by the visitors easily eclipsed that from Everton, adding to the impatience of the home crowd wanting similar evidence of a balanced team.

It needed a superb intervention from Séamus Coleman to prevent Alli converting Kyle Walker’s low cross towards the back post from Tottenham’s first meaningful attack. Moments later Pochettino’s side struck Everton’s woodwork for the first time when Harry Kane was encouraged to shoot from distance by a retreating defence and obliged with a powerful drive that beat Howard only to rebound off the inside of a post.

It seemed only a question of time before Tottenham took the lead. Everton did not have one touch in the final third in the opening 19 minutes yet stunned Spurs, and arguably themselves, by piercing Lloris’s defence with their first foray forward. In another echo of the Stoke defeat, specifically Romelu Lukaku’s second goal, Tom Cleverley swept a fine cross-field ball into the Belgium international lurking with intent in the box. This time Lukaku cushioned a header down for Lennon, who took one touch before steering his shot beyond Lloris’s right hand and into the far corner.

The goal was Lennon’s first since joining Everton on a permanent £4.5m deal from Tottenham in the summer and clearly satisfying for a player who ended his White Hart Lane career training with the club’s youngsters. Lennon was afforded a rapturous reception by the Spurs’ supporters when replaced by Gerard Deulofeu on the hour, his withdrawal prompting boos from the home crowd.

Everton’s lead did not change the flow of the first half and Ben Davies hit Howard’s crossbar with a thunderous left-foot shot from Christian Eriksen’s well-worked corner. Tottenham deservedly levelled in stoppage time, the manner of their equaliser more surprising than its arrival. Having failed to capitalise on one of their intricate passing moves around the Everton area, the visitors went long with their final attack of an impressive half. Toby Alderweireld dissected Everton’s central defence with a long ball that Alli read perfectly and executed superbly, stealing in ahead of Coleman to control on his chest before sending a first-time volley beyond Howard.

Martínez’s team reacted as they had to in the second half, with far more aggression and adventure on the ball, although Kane was close to a second for Spurs when Alli expertly chested the ball over the Everton defence. Lukaku was millimetres from connecting with Deulofeu’s inviting cross to the far post while another Everton substitute, the impressive Muhamed Besic, drew a finger-tip save from Lloris with a volley from 18 yards.

Everton continued to press for a winner in the closing stages while Spurs, so dominant before the break, were restricted to shots from distance that rarely extended Howard. Lloris, by contrast, was ultimately the busier keeper as the game opened up into an entertaining, end-to-end affair and blocked Ross Barkley’s goal-bound shot in the final seconds.